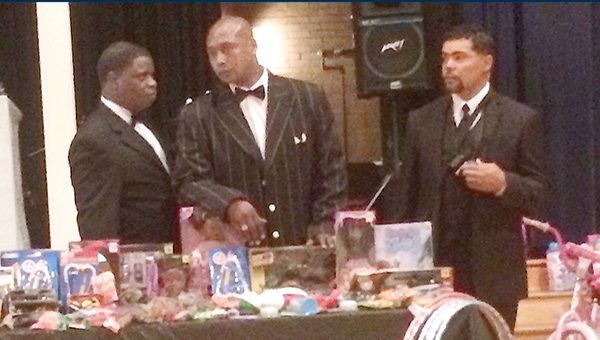 “No man stands so tall as when he stoops down to help a child,” St. Mark Lodge No. 24 Secretary Catories Howard said.

Members of St. Mark Lodge stooped down to provide Christmas gifts for over 100 children Saturday at an event at Lipsey School. The event featured food, live music, a drawing to give away four bikes and of course, Christmas toys for the children.

“Masonry, it’s really all about faith, hope and charity,” Howard said. “We do this because it’s in our hearts.”

Music for the event was performed by The Siloam Young Adult Choir and a solo by Idella Sanders.

“We had chicken, we had barbecue, we had salad, cakes and dressing,” Howard said. “It was awesome, and we plan on doing it again in 2016. … [The kids] had an awesome time. After it was over with at about 6 p.m., we stayed there until about 10 p.m. cleaning up. There was so much going on. Those kids enjoyed themselves. Some of the kids actually came back and helped us clean up.”

Howard said the lion’s share of funding for the event — over $1,000 — was paid out of pocket by the lodge from their dues —money that was originally intended to be spent repairing the roof at their lodge on Washington Street.

“We weren’t asking for any kind of donations from nobody. There were people that gave donations to our P.O. box number. I think there was three people who did that,” Howard said. “We were trying to take care of this event first. We’re thinking about them first before we’re thinking ourselves.”

Now that the event is over, Howard said fixing the roof is back on the agenda. The lodge building was built in 1942. According to the master of the lodge, Steve Jones, about 10 years ago a tree fell on the building and it has been unused ever since. Howard said they’d gotten several quotes for the repairs, ranging from about $2,200-$3,200.