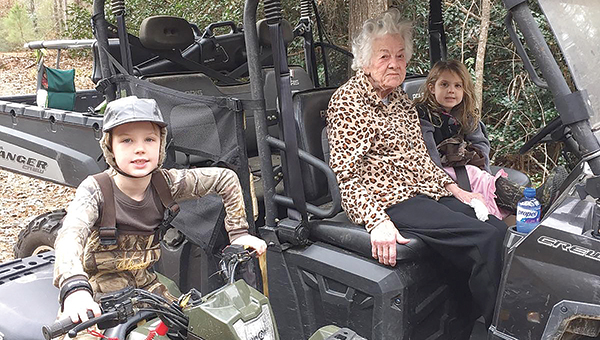 Photo submitted/
Evelyn Davis, center, will celebrate her 100th birthday after Christmas. She has lived her whole life in Lincoln County. She is pictured with her great-grandchildren Cam Walker and Carolina Walker.

Evelyn Davis was just shy of 3 years old when The Great War ended. She lived through the Depression, World War II and Vietnam. She saw the fall of the Berlin Wall.

Davis will celebrate her 100th birthday on Dec. 27 at the Fellowship Hall in First Baptist Church.

“She taught school for 30 years here,” Davis’ daughter Kathy Walker said. “She has a lot of former students that are always asking about her.”

Davis used to walk to Mt. Moriah every day for homeschooling, and she graduated from Brookhaven High School. She said she’s lived in Lincoln County her entire life. She’s seen Brookhaven grow in the last 100 years, and she remembers it fondly.

She grew up on a farm just outside of town. That farm has been in her family for generations.

“[Through the Depression] they had a working farm,” Walker said. “I know it was my mother and her sister and her brother, and they still went to college during that Depression time. But that was because they were self sufficient on that farm, and they had several different little businesses.

“She still has — her great-grandfather came here in 1850, and we still own that homestead from 1850. So she’s got some roots here.”

Davis’ children and grandchildren used to come by that farm every Christmas to cut down a tree. Walker remembers her son dragging the tree behind him on a pony.

“From the time they were little, we would go out and take the axe to the tree,” Walker said. “That was probably the most memorable.”

For the younger generations, Davis said, “Always do what your mother taught you to do when you were coming up. Don’t forget it. My mamma said, ‘Don’t do that.’ so I don’t do that.”