Giving back when stakes are high 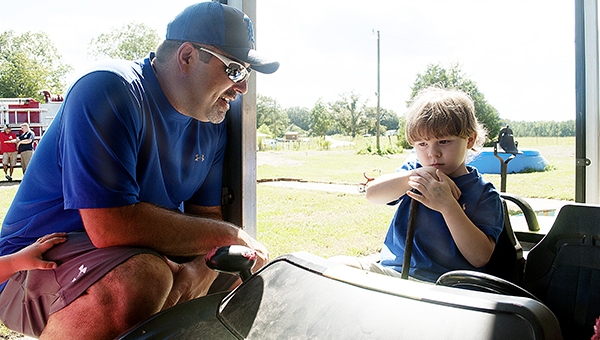 Photo by Julia Miller / Chris Reed talks to Gabe Albritton a few days after the boy was rescued from a well on Labor Day. Reed gives back to his community through his volunteer service with the Hog Chain Volunteer Fire Department.

Chris Reed has dedicated his life to responding to people in need and helping in times of crisis. By day, he serves as an emergency response coordinator for the Mississippi Department of Health, and at any other given moment, he’s on call as a volunteer firefighter.

In Reed’s day job as an emergency coordinator, he serves as a liaison and technical adviser, assisting local emergency managers and other state agencies in response to emergencies. He has served in this capacity since 2003 and has been involved with local volunteer fire departments since 1996. Reed, 37, has been a captain at Hog Chain Volunteer Fire Department for more than six years and became president of the VFD three years ago.

He has four children with his wife of 14 years, Keiza: Peyton, 11; Bailey, 10; Lynley, 5; and Madelyn, 4. He said leaving his family is one of the toughest parts of this line of work.

“Emergencies don’t take holidays or Christmas break,” Reed said. “It’s leaving your family and them wondering if you’re coming home. It’s the same for everyone. Every firefighter, law enforcement officer, EMT is a hero. Career or volunteer, they all do it for a reason, and it’s to help others.”

Reed got involved with firefighting in high school through friends. He said he knew immediately that was something he would do for the rest of his life, and now people who know him best know that volunteering is intrinsic to Reed. Reed is an admitted adrenaline junkie but said his love for serving as a volunteer firefighter is much more than the thrill of answering the call.

“It’s just helping somebody. It’s an adrenaline rush, for sure, but it’s also a brotherhood,”Reed said. “There are a lot of great people in fire service, both volunteer and career. We’re all family. I enjoy being around people, and it’s kind of a way to put it all together. A lot of volunteers have a huge heart because they’re giving up their time — missing time with family, holidays, taking off work. It’s a great group of girls and guys that give up their time to help others.”

The sense of family is one of the aspects of firefighting, and emergency response in general, that makes the job more meaningful, Reed said.

“It’s not about running red lights or getting to blow the siren, it’s about truly being able to help others,” he said. “You’re putting your life in their hands sometimes because you have to watch out for each other, and you have to trust those people you work with. In Lincoln County we’ve been blessed that it is a brotherhood. Everyone works really great together, and God has truly blessed us.”

Lincoln County Emergency Coordinator Clifford Galey said Reed is one of those who always shows up and is always there in an emergency situation. Reed was one of the first on the scene on Labor Day when a 4-year-old fell into a dry well, and Galey said he laid there until they got the boy out four or five hours later.

Reed cites the well incident as one of the best resolutions to a bad situation he’s seen. He spent six months on the coast after Katrina, but staring into the well at the scared little boy was the most intense situation that ended well.

“I’ve got four kids, and all I could imagine was if it was one of my kids in the hole and what it must be like for a parent going through that,” Reed said. “Trying to talk him into doing what we needed him to do, it was heartbreaking because there weren’t a whole lot of options for getting him out. But there was a great group there that worked together that day, and God blessed him and blessed us and was watching over us.

“It was intense, just trying to talk to him and not being able to show him,” Reed said. “He was just a small child, he didn’t know, and trying to make him understand what to do… I think pretty much everybody around the hole was the same, thinking ‘What if this was one of ours?’”

Volunteer and career firefighters alike respond to much more than simple fires these days —hazardous materials incidents, motor vehicle accidents and pretty much any other dangerous situation in which volunteers might be useful.

Reed said he copes by spending time with his children and family, and with youth in church. Serving in his line of work — especially as a volunteer, receiving no compensation for potentially life-saving service — is not for everyone, but Reed said everyone has something to offer.

“It’s just something that’s in you,” Reed said. “Volunteering, it’s a network of brothers. Not only in Lincoln County but throughout, nationwide. Believing in God and that he’s blessed you and given you the ability to help others, that’s just what we do. Everybody’s given a gift, no matter how big or how small, it’s up to you to use it to the best of your ability.”