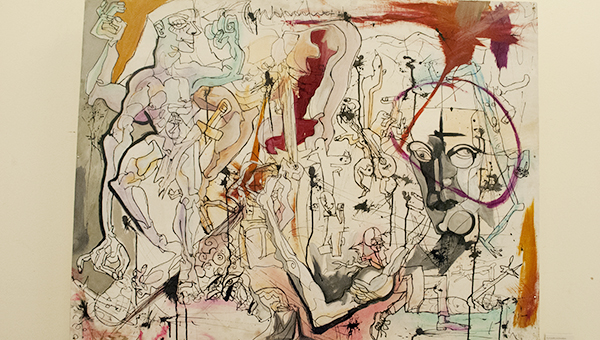 This month, Mississippi School of the Arts students have the opportunity to share their talents with the community through a three-part art show located in Enochs Hall, Johnson Institute and the Lincoln County Library.

She said seniors are looking to submit their pieces as applications to college while juniors are exploring technical aspects. Walters said students who come to MSA have a variety of backgrounds, with some having private teachers and others having no formal training, so they always start with the basics, like how to hold a pencil. Juniors are able to explore many techniques they’ve never seen, but seniors are beginning to focus on what aspects they enjoy.

Walters said students did everything to display the show, from the art to planning the reception. The show will be up throughout December.

Taylor Gunthard, a MSA junior, said she has always wanted to have a career in art, and she realized that attending MSA would help her achieve those dreams.

“I wouldn’t have gotten looked at by the schools I’ve been looked at,” she said.

She said her work is mostly symbolic pieces, and they focus on characters.

After MSA, Gunthard hopes to pursue a career as a storyboard artist.

(From top) “The End” by Gabrielle Davis, “E-MAN” by Emmanuel Williams and “Stingray Bay” by Hannah Newman.

Aiyana Kline, a MSA senior, said she remembers receiving a promotional letter in the mail from the school.

“I jumped right at it,” she said. “I’ve always had a passion for art ever since I was little.”

Kline explained that MSA taught her a lot about the technical side of art.

“I had never painted like we would here,” she said.

Kline said she draws on nature for her art. She said her art tends to focus on animals or animal bones.

“What interests me is fantasy, creating from nature and animals,” she said.

Kline hopes to pursue a career as a concept artist after MSA.

Darian McGehee, a senior at MSA, said she’s been determined to go to MSA since fourth grade. A counselor called her to the office after seeing one of McGehee’s paintings and told her about the school.

“Ever since then, I’ve been working toward it,” she said.

MSA has helped to continue that growth. Before the school, McGehee mostly created imitations and still life. Now, she has developed her own style and does originals. She said she enjoys bringing fairytales to life through mixed media works, sculptures and illustrations.

But more importantly, MSA has taught McGehee about an art path she didn’t know existed.

“I didn’t know curating was a thing; now that’s what I plan to go to college for,” she said.

McGehee hopes to attend the Kansas City Art Institute and then pursue a career at a museum or buy for a private collector. 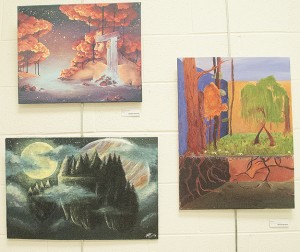 (Clockwise from top left) “Illuminescent” by Adelle Burandt, “Roots” by Alexis Weaver and “By the Light” by Abigail Holmes.

Cyrus Neese, a MSA senior, said he has always enjoyed drawing cartoons, so he and a friend decided to apply to the school. They both were accepted, and since then their work has gotten more serious.

“We were just talking before about how we’re doing better things,” he said.

Neese said his art is inspired by reading philosophy and religion. For his senior project, he is particularly focusing on Mesopotamia religion — “Greek mythology is overdone,” he explained.

Neese said he also represents the shared struggle of people.

“Things that are universal to all human kind,” he said.

After MSA, he hopes to pursue a career as a filmmaker.

Sydney Robertson, a MSA junior, said in such a short time the school has really helped her mature and become more responsible with her art.

“I realized I actually have to do things and turn them in,” she said. “I can’t spend a month on one piece.”

Robertson said her goal with her art is to make people feel whimsical. She also said her work often incorporates a lot of colors from the sky.

“When I look up at the sky, it makes me happy,” she said. “I hope people look at my paintings and get some kind of good feeling.”

Robertson hopes to be able to one day sell her paintings.

Emily Schobey, a MSA senior, said the showcase gave her an opportunity to show off her work, but it didn’t really add anything to her work load.

“I have to make art constantly: one, because I want to, and two, because I’m a senior,” she said.

Schobey’s dedication to art is what brought her to MSA.

“My school wouldn’t let me into the art program,” she said.

Instead of giving up, Schobey turned to MSA and was accepted. She said the best part of being at MSA is being surrounded by a community of artists, to learn from her peers and to learn to critique art.

Schobey said she tries to find problems and explore them in her art. Right now, she is working on a series where she represents theorems in science with an image or series of images.

“I would really love to be a paid artist; to make art and people pay me for it in a way I can survive,” she said.

Katt Stringer, a junior at MSA, said she applied to MSA partly to help with college applications, but she also has been able to find a group of people who share her interest.

She said she hasn’t yet discovered her style, but in her time at MSA she has learned the rules and techniques of art.

Stringer’s goal is to get really good at portraits.

Lexi Weaver, a MSA senior, said she applied to MSA with six of her friends.

“I didn’t think I would get in,” she said. “And I was the only one that got in. It made me want to come here and see what I can do.”

Weaver said MSA has taught her how to create art with a purpose.

“I’m no longer just painting,” she said. “I know what I’m painting before I do it.”

Weaver said she pulls a lot of inspiration from nature, but most of her art is spontaneous.

Weaver hopes to continue her studies in the art field after MSA.