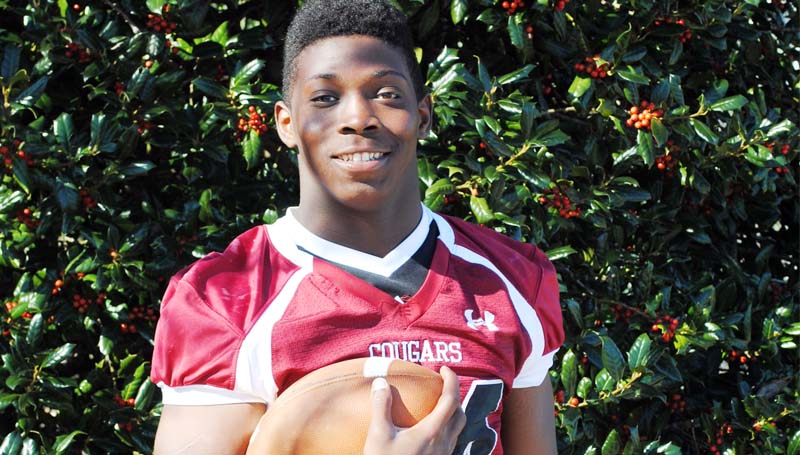 For these accomplishments Brown has been selected as The Daily Leader’s Overall Most Valuable Offensive Player.

“I am very honored to be named the All-Area MVP,” Brown said.

The All-Area Offensive Team is made up of players inside and outside of Lincoln County with stats being provided by high school coaches. Having 11 schools in The Daily Leader’s coverage area, the dream team selection has been reformatted to First Team selection, Second Team selection and honorable mention.

The All-Area Defensive Team and Coach of the Year will be revealed next Sunday.

Receiving honors at quarterback on the First Team is Charl’Tez Nunnery of Lawrence County and Ladarrious Williams of Hazlehurst.

Helping Brown in the backfield are Damarion Wilson of Hazlehurst, Thomas Poole of Brookhaven and Cortney Smith of Franklin County.

Tyler Mixon of Brookhaven was selected as the team place kicker. Rykendrick Harness of Lawrence County has been selected the return specialist.

De’Martre Collins of Franklin County and Cornelius Barlow are the all-purpose players.

The players receiving Second Team honors were Jacob McDaniel of Franklin County and Madison Smith of Brookhaven Academy at quarterback.

In the backfield are Parker Flowers of Loyd Star, Malik Gray of Hazlehurst, Tanner Waldrop of Enterprise and Kobe Roberts of Bogue Chitto at the running back position.

Working in the trenches of the offensive line are LeChris Hood of Hazlehurst, Ben Cowart of Franklin County, Matthew Craft of Wesson, Nick Smith of Loyd Star and Shawntavis Vardaman of Hazlehurst.

Quitten Brown (5-7, 190, jr.),  the son of Tisha Fields, had a break-out season in 2015 as he helped lead his Lawrence County Cougars to a 13-2 season. Lawrence County dominated the regular season to win the Region 6-4A crown undefeated and clinched the No. 1 seed in the playoffs.

In the Cougars’ playoff run, Lawrence County crushed the Columbia Wildcats 40-21 in the opening round, defeated East Central 26-20 in double overtime in the second round and knocked off Vancleave 35-21 on the roar in the third round to host their first ever South State championship in Monticello.

In the South State championship contest, the Cougars fell to the St. Stanislaus Rock-A-Chaws 62-28. Brown powered the Cougars in that game with 16 carries for 146 yards and two touchdowns.

“We had a great season as a team and as a community,” Brown said. “We are looking forward to next season as we are already working hard to stronger so that we can get back to the south state championship and have a different outcome.”

“Quitten is a great player and a great kid,” coach Jaymie Palmer said. “He works extremely hard and he is a very explosive player that can make big plays from anywhere on the field. He had an unbelievable year in which he scored 40 touchdowns in a season and he plays defense as well.”

Rykendrick Harness (5-7, 160, sr.) brought plenty of excitement with his kickoff return skills as he finished with 351 yards.

Matthew Craft (5-9, 180, jr.)  used his skills to help his Cobras on offense. He had six pancake blocks for the season.