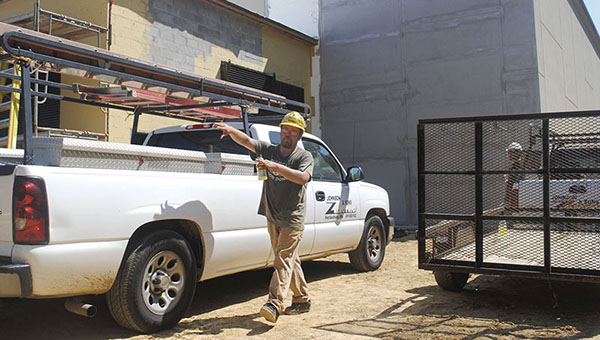 File photo/
The FEMA building was constructed in 2013, largely using federal funds. The Brookhaven Recreation Department manages the facility, but in the case of an emergency, control would revert back to Clifford Galey, Lincoln County Civil Defense director.

What are the requirements to open the FEMA shelter
in Brookhaven? Can it be used during severe weather? Who is in charge of it? And how does the public know when it’s open?

Lincoln County Civil Defense Director Clifford Galey said there are currently no plans in place for allowing residents to use the shelter during a storm.

“The FEMA shelter needs to be open for evacuation for a hurricane or some major event,” Galey said. “I would have to sit down with the mayor and discuss it because the shelter actually belongs to the city.”

Brookhaven Parks and Recreation Department Director Terry Reid the shelter is only opened if the governor declares a state of emergency.

The $3.2 million shelter on Belt Line Road is capable of holding up to 1,000 people. The building is self-sustaining in the event of an emergency.

“These safe rooms are intended to protect occupants during a short-term, extreme-wind event”  FEMA said. “They are not recovery shelters intended to provide services and housing for people whose homes have been damaged or destroyed by fires, disasters or catastrophes.”

Some residents expressed frustration that the shelter wasn’t opened during the weekend’s severe weather, which included a tornado warning.

The weather in December has been unseasonably dangerous, and the Mississippi Emergency Management Agency has several guidelines in place for what to do in the event of a tornado.

What to do if you are in your home during a tornado:

• Go to the lowest level of the home, an inner hallway, or smaller inner room without windows, such as a closet or bathroom.

• Get away from windows and go to the center of the room. Avoid corners, because they tend to attract debris.

• Get under a sturdy piece of furniture, such as a workbench or heavy table.

If you are in a mobile home:

• Evacuate the mobile home, even if it is equipped with tie-downs. Take shelter in a building with a strong foundation, or if one is not available, lie in a ditch or low-lying area a safe distance away from the mobile home. Tornadoes cannot change elevation quickly enough to pick someone up out of a ditch, especially a deep ditch or culvert.

If you are at work or school:

• Go to the basement or to an inside hallway at the lowest level of the building.

• Use your arms to protect your head and neck.

• If possible, get inside a sturdy building with a concrete foundation.

• If shelter is not available, or there is no time to get indoors, lie in a ditch or low-lying area or crouch near a strong building.

• Be aware of the potential for flooding.

If you are in a vehicle:

• Never try to out drive a tornado in your vehicle. Tornadoes can change direction very quickly and can lift a vehicle and toss it in the air

• Get out of the vehicle and take shelter in a nearby building.

• If there is no time to get indoors, get out of the vehicle and lie in a ditch or low-lying area away from the vehicle.