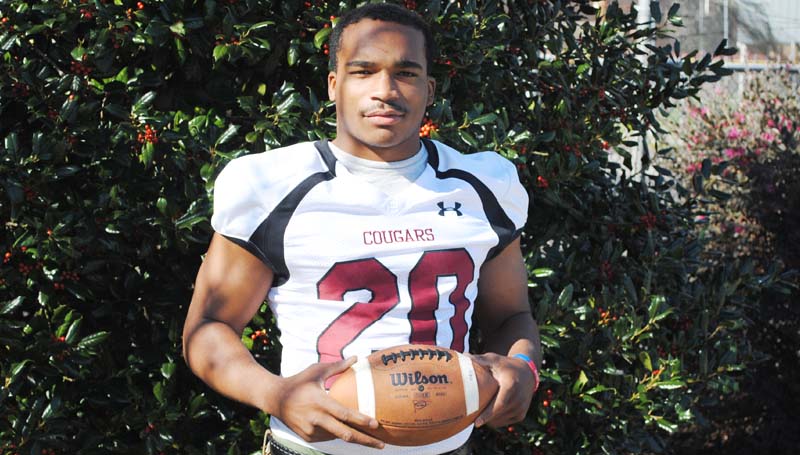 Lawrence County senior linebacker T-Tez Cole dominated on defense as he powered the Cougars with 187 total tackles for an average of 12.5 tackles per game.

Cole had 28 tackles for loss, two sacks, four fumbles caused and five fumble recoveries. He returned one fumble for a touchdown, and also returned his one pass interception for a touchdown.

For these accomplishments Cole has been selected as The Daily Leader’s Overall Most Valuable Defensive Player.

“I am very honored to receive the defensive MVP award,” Cole said.

This defensive dream team is made up of players inside and outside of Lincoln County with stats being provided by high school coaches. Having 11 schools in The Daily Leader’s coverage area, the dream team selection has been reformatted to First Team selection, Second Team selection and Honorable Mention.

Battling in the trenches as linemen on the First Team selection are Stephen Springfield of Brookhaven, Chris O’Quinn of Franklin County, Patrick Harris and Duquan Tillman, both of Hazlehurst.

The dream team’s punter is Antonio Christmas of Franklin County.

In the linebacker position are Sherman Jackson of Bogue Chitto, Demarcus Smith of Wesson, Dedric Smith of Brookhaven and Connor Griffin of Brookhaven Academy.

In the secondary are Kejuan Brown of Lawrence County, Damariun Wilson of Hazlehurst, Kobe Roberts of Bogue Chitto and Lakin Wallace of Loyd Star.

The Second Team punter is Thomas Patterson of Loyd Star.

T-Tez Cole (6-0, 215, sr.),  was Lawrence County’s team captain and leader on and off the field. Cole did whatever his coaches asked him to do, whether it was to play on offense, defense or special teams.

Cole played sparingly on offense, but was a big producer as he rushed for 644 yards and six touchdowns and caught 16 passes for 260 yards and four touchdowns. On special teams, Cole finished with 77 total yards as he helped lead his Lawrence County Cougars to a 13-2 season.

“We had a great season,” Cole said. “This was a great experience for me and my teammates. I expect everyone on the team will learn from this experience and work even harder during the offseason to prepare for next year’s state championship run.”

Cole is being highly recruited by several JUCO colleges around the area. He has already received scholarship offers to play both football and baseball. He has not officially decided where he wants to attend yet, but he wants to major in agricultural engineering.

“Cole is a great player and a great kid,” coach Jaymie Palmer said. “He possess that ‘it’ factor that all coaches loves. T-Tez will always make the big plays when we need it. He also sets a great example for the rest of the team to follow. He is very dependable and a hard working individual that loves the game.”

Patrick Harris (5-11, 200, jr.)  was credited with 114 tackles, two forced fumbles, one interception and six sacks for the Hazlehurst Indians.

Antonio Christmas (5-10, 165, sr.)  was a key factor for Franklin County. He helped pin opposing offenses deep in their territory with an average of 30 yards per punt.

Billy Johnson (5-10, 195, sr.) was one the main catalysts on defense for Hazlehurst with 78 tackles and four sacks on the season.

Sherman Jackson (6-0, 170, jr.)  made 73 tackles, one fumble recovery and two sacks for the Bogue Chitto Bobcats

Kobe Roberts (5-10, 165, sr.)  made 95 tackles on the season, with one interception and two fumble recoveries for the Bobcats.

Lakin Wallace (5-9, 150, soph.)  had very productive season for the Hornets with 64 tackles, including 42 solos, two fumble recoveries and one interception.