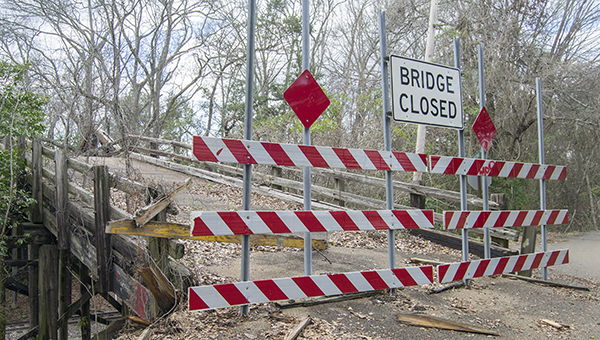 File photo / According to a recent report from the Mississippi Economic Council, 91 local and 15 state-maintained bridges in Lincoln County are deficient.

A recent report from the Mississippi Economic Council task force summarizes the infrastructure needs statewide and calls for action to support the MEC task force in efforts to create legislative action.

In Lincoln County, 91 local and 15 state-maintained bridges were deemed deficient, according to most up-to-date data from Mississippi Department of Transportation.

County Engineer Ryan Holmes brought the report to the most recent Lincoln County Board of Supervisors meeting.

“This isn’t data they just pulled out of the air to make them feel good,” Holmes said. “They actually reached out to county engineers, and I did a survey for our county — and also for the city too — to give them this information, so it’s factual. And it’s staggering. We just can’t replace them fast enough.”

The Blueprint Mississippi Task Force outlined a long-range, ongoing program with sustainable income year after year, with a call for funding to be indexed to increase with inflation and with an intense effort in the first 10 years to target the greatest needs. The group pledges that it’s going to create a lobbying campaign to push for legislative action — it’s called Excelerate Mississippi.

The report explains how Mississippi’s infrastructure got so bad, citing inflation, construction costs, gas consumption (a main component for providing road funds) and the last construction program that increased miles traveled by 90 percent. A great deal is due to not maintaining the infrastructure created by a program in 1987 that built 1,077 miles of four-lane highway at a cost of $3.38 billion over 26 years. Business support was key to that venture’s success.

“There’s been a 108 percent increase in inflation since then and construction costs have gone up 217 percent… that just gives you an idea,” Holmes said. “Most of our funding for road improvement comes from the gas tax. Our gas revenue has only gone up 1.6 percent. Our current fuel tax is at 18 cents, which is lower than both of our neighboring states.”

Excelerate Mississippi calls for additional funding to be allocated to highways and transportation. The recommendations include an additional $375 million a year targeted for the most critical bridges and roads – with $300 million focused on state roads and bridges and $75 million or 20 percent for local needs. This would provide $3.75 billion over the first 10 years of the program, and continue to provide funding going forward, the report claims.

Jeff Dungan, of Dungan Engineering, said the report doesn’t state specifics on how the money would be distributed locally and what would be required to execute repairs with the money — but it does show how dire the need is.

“They just say that ‘Hey, right now there’s $72 million a year being spent on local roads and bridges — there needs to be another $75 million spent,’” Dungan said. “They’re saying basically that y’all have half the money you need.”

The program calls for MDOT to rehabilitate, repair and maintain road surfaces that no longer meet the standards for which they were constructed. Ongoing funding, the report said, will also close much of the gap on needed preventive maintenance.

Joe Sanderson Jr., who heads the poultry company that bears his name and led the study, suggested at a news conference that it might be a good idea to raise taxes for transportation at the same time that officials were cutting the state’s personal income tax and corporate franchise tax, with the tax cuts possibly outweighing the increase, the AP reported.