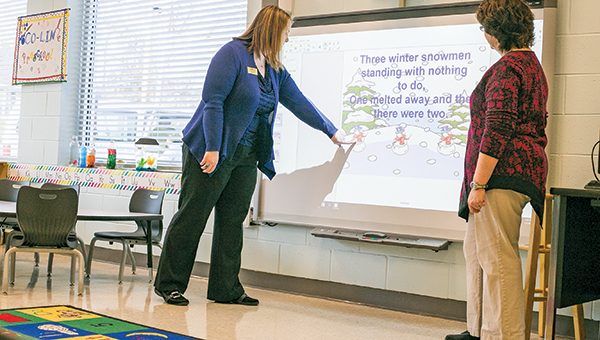 Photo by Kaitlin Mullins / Dean Jackie Martin (left) and preschool teacher Melissa Kyzar check out the educational games that children at the Copiah-Lincoln Early Childhood Education facility enjoy playing on the new smart board. The new facility was finished in November.

The Early Childhood Education program at Copiah-Lincoln Community College has just settled in to its new upgraded facility, and some might say the move was 37 years in the making.

The building took a little over a year to build and was completed in November, said Jackie Martin, dean of the Career and Technical school. The program had been in the same building since it started back in 1978.

It cost $2.1 million in state bond money and $400,000 additional local county funds to build and furnish. The building has interesting architectural elements like curved walls, a varied layout and sky-lit beams.

“It’s been long overdue,” Martin said at an open house Tuesday. “We’re excited to have it. It’s definitely something that is utilized by many of the faculty and staff, but it’s also a program that has one of the highest enrollments as well.”

One important upgrade is the security system. Each parents and student has a code to enter the building, and everyone else must be buzzed in. There is a computer lab, eating area, teacher and student workrooms, a conference room, large storage area and outdoors there is a covered area as well as a whimsical new playground.

The children who go to preschool at the facility are mostly children of faculty and staff, and a few are students’ children. They are receiving an early education that is more advanced than that of most daycares.

“Most regular daycares don’t know this but even No Child Left Behind had a curriculum for 2-, 3- and 4-year-olds,” said Mary Price, program coordinator. “There is a Common Core curriculum for twos, threes and fours, so we use that. Most of the kids are going to public schools where Common Core is used, so this helps them get ready for that.”

Co-Lin’s Early Childhood Education program has a lab school, meaning students work with children on campus rather than going out into the community to a daycare or school. It’s a more controlled environment — the facility has observation windows for each classroom so that students can observe children without disturbing the teachers and kids.

“The students love it,” Martin said.

Each student does a case study for a particular child, for whom they create objectives or lesson plans. They observe the child’s language, cognitive and fine motor skills, among others.

The students in the program are working toward their Associate of Applied Science degree, which will qualify them to teach at daycares, pre-schools and HeadStart centers or work as assistant teachers or health department licensing agents. The program is one of the largest at Co-Lin, with one of the highest enrollment rates.

“Oh absolutely I think it will attract more students,” Martin said of the new facility.

The new facility, Price said, finally reflects the quality of the program.

“There are accreditations we could’t get before,” Price said. “We feel like we have a top program, and we want to reflect that on paper.”