No injuries reported in Tuesday fire 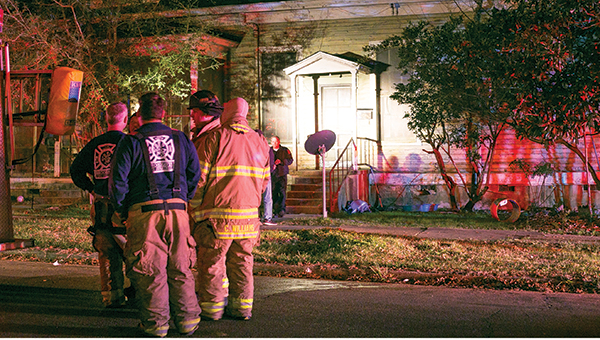 Photo by Kaitlin Mullins / BFD responded to a fire on Court Street Tuesday night. The fire was contained and damage minimal.

The Brookhaven Fire Department is investigating a small house fire on East Court Street that took place Tuesday night and was initially reported as arson.

The house fire at 226 East Court St. was called in about 7:30 p.m., and was extinguished by the Brookhaven Fire Department roughly an hour later. The building houses at least two apartments. The resident who was home when the fire started was uninjured, though BFD Chief Tony Weeks said he was unable to provide any clear information on what happened.

Weeks said the fire originated in a closet. Firefighters said it was contained, only causing about 20 percent damage. The structure is intact and flames did not affect the house’s exterior.

The initial call about the house fire indicated that a subject possibly involved in setting the fire was “heavily armed,” but responders at the scene say no gun or gunfire was witnessed. Brookhaven Police Chief Bobby Bell said no gun or armed subject was found. Responders also said they did not hear any gunshots. To be safe, BPD checked the scene before any firefighters entered.

Weeks said it is unknown whether the fire was set or was accidental.