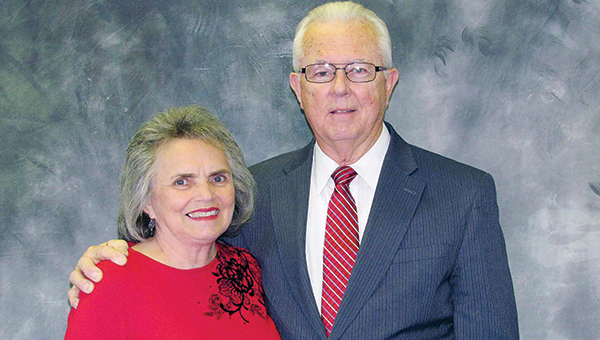 Photo submitted / Bendon Ginn and his wife Dot Ginn pose for a photo.

Bendon Ginn has been a preacher for a half-century, and he recently transitioned to a part-time role.

For the last 10 years, he has been the preacher at Philadelphia Baptist Church in Wesson.

“The call is a lifelong call,” Ginn said. “The way I understand the call of God is that you serve him until you can’t.”

Philadelphia Baptist Church is located at 3646 Highway 550 NW. Ginn said there are around 150 attendants at worship on Sundays.

“I would say it’s a strong rural church,” Ginn said. “It’s a great church with mission-minded, good people. I told them God saved the best ‘til last.”

Ginn described his career as a pastor as a journey, one that began when he became a Christian at age 11.

“That was the foundation of all of it,” Ginn said.

At 18, in-between semesters at Southwest Mississippi Community College where he began sharing his faith with his fellow students, Ginn spent time on a farm in Tylertown. It was on that farm that Ginn said he got the call to preach.

“Just walking around the woods on the farm I just felt like God was really calling me,” Ginn said. “I was licensed to the gospel of ministry by my home church there in Tylertown. From there, it was education: William Carey College and then New Orleans Seminary.”

Ginn preached his first message in 1961. Six years later he began going on missions with his new wife, Dot.

“We went to the Northwest and worked with young people and had an incredible response with people that had not heard [the gospel],” Ginn said.

Those missions, Ginn said, were fostered by talks and conferences in seminary. When Ginn and his wife returned to Mississippi in 1970, Gin said his focused shifted to helping local churches become what he calls “Acts 1:8 churches.”

Acts 1:8 says, “But you will receive power when the Holy Spirit comes on you; and you will be my witnesses in Jerusalem, and in all Judea and Samaria, and to the ends of the Earth.”

And Ginn said he has been to the ends of the Earth. He’s been to China four times, Kazakhstan, Mexico and Canada.

“It’s very challenging,” Ginn said. “The culture. Probably the biggest challenge for me was the food issues. It was a lot to get used to. The language of course. We didn’t speak Chinese. But all in all, we go because we love God, and we love those people. The few we met were incredibly warm and receptive. If I could encapsulate it like this, the family of God is the most wonderful kind of family all over the place. We’ve been in the Northwest. We’ve been in China. We’ve been to Mexico and Canada. The people are the same. That family is a loving, caring family wherever you go on this globe. That’s been a great, great joy to us.”

Ginn said he hopes to continue preaching part-time, but the time off will give him more time to spend with family. He has seven grandchildren and another due to be born in February.

“Our son is — he’s 39, and they’re having their first baby,” Ginn said. “It’s going to be a boy, and he’s naming him after me. So that’s a big thrill. We have four granddaughters and three grandsons at this point.”