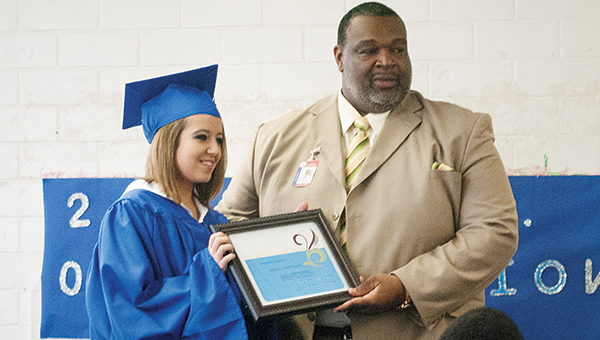 Photos by Julia Miller / Kristen Kirton , left, is only the second person to graduate from the GED program at Fannie Mullins School. Deputy Superintendent Rod Henderson presents her certificate at a recent graduation ceremony.

“How many of y’all know what it’s like to breathe hard? To gasp for air? Your body starts to shake because you’re gasping for air.”

Terrance Turner began his motivational speech at the Fannie Mullins School’s GED graduation by sharing his weakness that he had to learn to overcome. Mullins houses the alternative school for Brookhaven School District and within the past two years began a GED program.

The second graduate of the program, Kristen Kirton, was honored with a ceremony in December. LaRenda Harrison, director of alternative services, said the GED program’s success can be attributed to the program’s instructor, Dorothy Quinn. 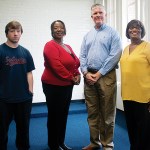 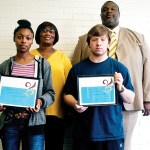 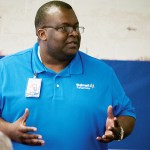 Terrance Turner shares the lessons he’s learned from dealing asthma throughout his life.

“She works well with them,” she said. “And they love and respect her.”

At the ceremony, students from the GED program, as well as students in the alternative program, were present to hear Turner’s advice.

“I thought I wanted to be a professional football player; I wanted to be the next Walter Payton,” he said. “What I realized is that the road is tough.”

That road is especially tough for someone suffering with asthma.

“It’s the hardest thing in the world to deal with that,” Turner said. “When things are tough, you always got an excuse, a reason why you’re not succeeding. It’s always someone else’s fault.”

Growing up Turner became reliant on the emergency room to deal with his asthma. He reached a point where every time he played football he’d end up at the hospital receiving breathing treatments. He went to the hospital so many times that the doctors and nurses knew him by name and knew exactly what was wrong. Then, one night his ER routine was broken.

Another boy came into the ER at the same time, and he was unconscious. Turner recalled seeing the boy’s eyes roll in the back of his head.

“We both were lying next to each other,” Turner recalled. “There was a curtain between us, but they hadn’t drawn it. All of my nurses, all of my comfort system, all of my support, all the people that took care of me when I came into the room, they weren’t there.”

Turner’s heart beat faster as he began to panic.

“It’s kind of like not having Mama and Daddy right there; not having brother and sister, not having somebody to hold your hand,” he said.

A doctor approached Turner and said something to him that he strained to hear. Because his oxygen was limited due to the asthma attack, all noises sounded muffled to Turner, but finally he made out what the doctor was saying.

“Terrance, you have to want to.”

Turner learned how valuable the simple act of wanting to control his breathing impacted his life.

“I knew what my weakness was. I was short of breath,” he said. “It was going to define my strengths. Your weaknesses will define your strengths.”

Although Turner did not live up to his childhood dream, he made it a lot further than many others would. Turner played high school and college football and even had a tryout for the Chicago Bears. What it took to get that far has made him successful in other aspects. Turner has a business administration degree from Millsaps and is employed at Wal-Mart in the transportation department. He owns a restaurant and is a veteran. Turner spent six years as a military intelligence officer.

“Life changes, and you have to be willing to change with it,” he said. “You’ve got to understand that you have to change.”

Not everyone suffers from asthma, but everyone deals with negative attitudes or mindsets at some time or another. Turner said overcoming that is just as important to success as learning to control his breathing was to him.

Turner said it also taught him that you have to take responsibility for your own life.

“It’s not your mother’s fault; it’s not your father’s fault,” he said. “Like some of you probably, I grew up in the projects. My mother had me when she was 15. I’ve been in the situation where I’m on welfare and by the end of the month we don’t have enough money to buy any more food. It’s peanut butter and jelly sandwiches, rice and butter — the bare necessities.”

Turner said by taking responsibility for yourself and learning to want something better, anyone is capable of being successful.

“You have the greatest opportunity, but you have to have the intentional fortitude to want to get up and be somebody,” he said.

The desire to be successful is a continual process that is constantly evolving as you grow.

“You’ve come across a milestone, and you’ve had a hard road,” Turner said. “I can’t tell you I understand, but I’m going to tell you I applaud you for not giving up. But you haven’t won anything. Today’s ceremony is nice, but tomorrow you’ve got to figure out what you’re going to do in life. You’ve got to be the best everyday.“