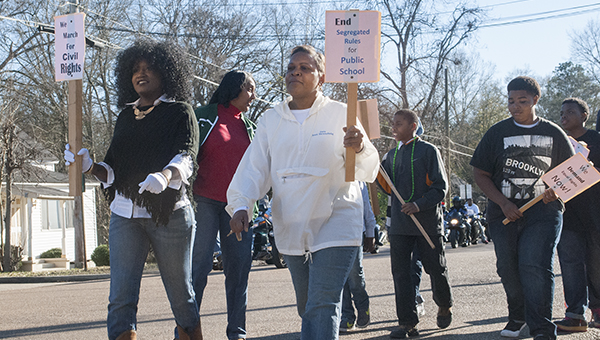 Started by Rose Powell of Polly’s on Main Street, the parade celebrates the life of Dr. Martin Luther King Jr. and his contributions to the civil rights movement.

In 2001, the parade leadership transferred from Powell to the Brookhaven-Lincoln County NAACP Branch. Bernetta M. Character, president of the local NAACP Branch, plans the parade each year in hopes of spreading King’s nonviolence teachings.

Character said that King had a great impact on the people around him, regardless of race, sex or religion.

“What I learned from King there, I have brought here to try and help grow this city,” Character said.

She believes participating in the parade will unify the community, recently plagued with an increase in violence.

“We’ve got to get back to the grassroots of respect,” Character said. “Togetherness. Rich, poor, black, white, marching together, as a unified people, will do that.”

In an effort to celebrate the life of King and the NAACP’s push for nonviolence in the community, city officials, notable community members and the 601 Bikers Club are expected to attend the parade.

Character said she also anticipates young and old community members she has visited to attend.

“There has been an increase in participation because I go around and personally contact people,” Character said.

Parade participants are asked to begin lining up at 3 p.m. in front of Williams Mortuary on East Minnesota Street. The fire department will lead the parade through town, and the celebration will end at Alexander Junior High School, where a program, in honor of King’s teachings, will be held.

Those who wish to participate in the parade are encouraged to contact Character for more information at 601-757-8094.