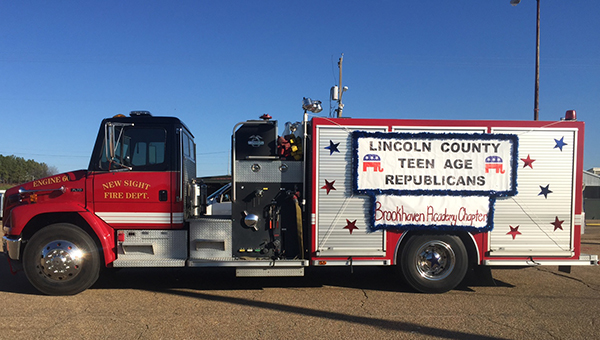 The New Sight Volunteer Fire Department participated in the Governor’s Parade in Jackson on Tuesday as part of Gov. Phil Bryant’s inauguration ceremonies.

Bryant was sworn in for his second term as the state’s 64th governor.

Smith received the invitation to participate in the parade from Hunter Foster with the Lincoln County Teenage Republicans.

“Hunter Foster and I are real good friends,” Smith said. “He called me about a week ago and invited me to drive a truck, and I volunteered to carry New Sight’s truck.”

Smith, who has more than 20 years of service in the department, said participating in the Governor’s Parade was an honor.

Smith said all of the volunteer fire fighters in Lincoln County should be recognized for the work that they do, and participating in the Governor’s Parade helped highlight their service.

“Believe it or not, but there were only two fire trucks in the whole parade,” Smith said. “We represented well.”

The Lincoln County Teenage Republicans serve as a youth-based organization that encourages teens to participate in political processes.

Smith said the teens that rode in the parade were thrilled to have the opportunity to see such a monumental event.

“They loved it,” Smith said. “I think they enjoyed it more than I did.