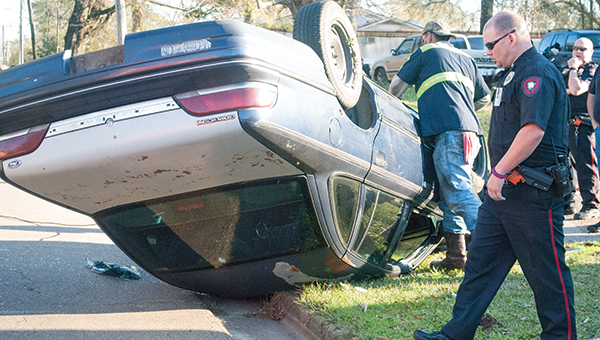 Photo by Kaitlin Mullins / A car accident Wednesday afternoon on Union Street sent one woman to the hospital after first responders extracted her from the flipped-over Crown Victoria.

Rescue crews extracted a woman from her vehicle after an accident on Union Street Wednesday.

Around 3:30 p.m., the Brookhaven Fire Department and Brookhaven Police Department responded to the call of a car that was upside down on Union Street at Jennifer Street. The driver had hit a large brick mailbox on the right side of Union Street, which ended up several feet away from where it stood originally.

A woman on the scene said she was holding the driver’s hand while the Crown Victoria car was upside down and the BFD was working to extract her. She said the woman driving was not too badly injured, and she would be OK. At approximately 4 p.m. the driver left the scene in an ambulance.

Police could not confirm how she was doing Thursday morning.