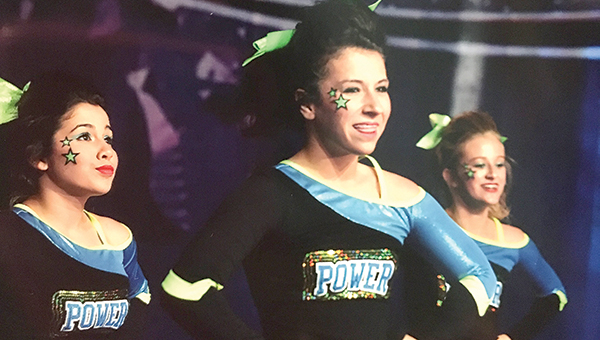 Photo submitted / Melody Ashley, a cheerleader at Powerhouse Allstars, has been nominated for The Cheerleader’s Magazine’s Cheerleader of the Year award.

Melody Ashley, 14, of Wesson received a finalist nomination for The Cheerleader Magazine’s Cheerleader of the Year award.

The winner will be chosen from the finalists, based on the number of likes each nominee’s picture received on The Cheerleader Magazine’s Facebook and Instagram pages.

Smith, who has been coaching competitive cheerleading for 16 years, said when The Cheerleader Magazine sent her a nomination form, she immediately thought of Ashley.

“They are looking for nominees who are outstanding on and off the floor,” Smith said. “You would have to know her story, but she’s always been a hard worker.”

At the age of 11, Ashley severed her right eye with a fly-swatter. She underwent multiple surgeries but still does not have vision in the eye.

Smith said the day of the accident Ashley’s mother called and explained what happened. 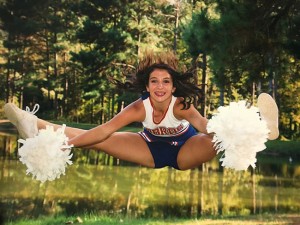 Photo submitted / Due to a flyswatter incident several years ago, Melody Ashley has lost sight in one of her eyes, but she doesn’t let that stop her from competing.

“Her first words to her mother when she woke up from recovery were, ‘Call Mrs. Robin and tell her I won’t be at practice today,’” Smith said. “That’s a work ethic you don’t find in every child.”

After the accident, Ashley had to sit out for three competitions, and it was questionable if she would ever cheer again, Smith said.

“I took so much time off, and I was just sitting at home,” Ashley said. “I couldn’t do anything.”

Smith said several months after the accident, a fellow member of the Powerhouse cheer team got hurt. Ashley found out and postponed her last surgery to fill in at a competition in Pensacola, Florida, she said.

Ashley said she jumped at the chance to get back on the floor.

“I think there was just kind of a revelation for her that you can get hurt doing just about anything,” Smith said. “She had that epiphany, where she said, ‘I’m going to do this,’ and let me tell you, she has not turned back.”

When Ashley returned, she was behind the other kids, but within a few weeks surpassed her skill level from before the accident, Smith said.

“I just wanted to be the best,” she said. “I wouldn’t let anybody stop me.”

“She loves cheering,” Berch said. “She lives and breathes it.”

Smith said she nominated Ashley for the award based on her hard work, the way she excels on the floor and all that she has overcome.

The winner will be featured on the front cover of The Cheerleader Magazine and each nominee’s picture will be included in the magazine with a short biography.

Ashley said being nominated and then selected as a finalist is a huge honor.

“I’ve followed all the nominees on Instagram every year,” she said. “It’s just really surprising that I would be one of those girls.”