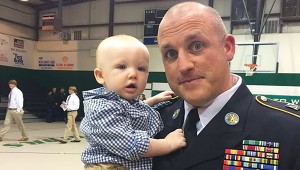 Jason Gaskin has always wanted to protect and serve.

Gaskin served as Brookhaven police officer from 2001 to 2004 before becoming a full-time recruiter for the Mississippi Army National Guard in 2005. He started serving as a part-time deputy with the Lincoln County Sheriff’s Department in 2006. As he says, he fills in for the full-time guys when they need days off.

In 2009, Gaskin was deployed to Iraq with the Mississippi Army National Guard in support of Operation Iraqi Freedom until 2010. Nowadays, he’s often a recruiter by day and answering calls as a deputy by night.

“A normal day with the Lincoln County Sheriff’s Department is simple,” Gaskin said. “Enforce the laws of the city, county, state and country. I, however, pride myself in going a little further. I try every shift I work to be kind to everyone I meet. To go an extra step to fix [our] relationship with the community.”

Gaskin grew up in a small town in Hinds County, Utica, until moving to Brookhaven when he was 14. Since then, Lincoln County has been home. Gaskin lives with his wife, Shanteau, and their three children: Caroline, 15, Annabel, 8, and Bishop, 10 months.

“I love this town and county and, God willing, will grow old here,” Gaskin said.

He said as far back as he can remember all he ever wanted to do was be in a law enforcement position and be a soldier.

“They are the only jobs I’ve ever had. I have no plans of doing anything else,” he said.

Gaskin said he thinks the most misunderstood part of a job in law enforcement is that they can’t be everywhere at once.

“Lincoln County is 588 square miles, and there are about 36,000 people in the county,” he said. “If every one of them were the police, we still couldn’t be everywhere at one time. This is why I go the extra mile to establish relationships and make friends in, around and outside of my community.”

Gaskin said he is grateful that he is so often able to serve people, and he owes much of that blessing to former BPD Chief Pap Henderson.

“For giving me a chance as a young man to be a police officer and the same to all my training officers,” he said. “I want to thank Sid Boyte for taking me to a recruiter all those years ago, so I could be a United States soldier. I want to say ‘thank you’ to all the sheepdogs that have come before me and those heroes that have given their lives for this country in a serving role of some kind.”

For Gaskin, his positions in the Army and as a deputy solidify a lifelong dream. To him, every day spent serving (when he’s not with his family, hunting or fishing or all of the above) is a dream come true.

“When I die, I desire no better winding sheet than the Stars and Stripes, a no softer pillow than the Constitution of my country,” he said.