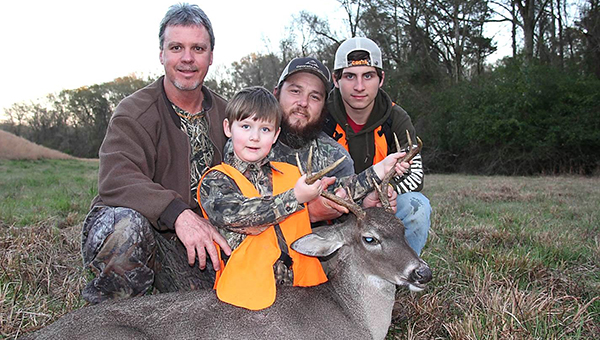 The Catch-a-Dream Foundation and Georgia Pacific of Monticello hosted 7-year-old Christopher Pena and his family for a sponsored hunt Thursday through Sunday.

Christopher, his parents Kristi and Christopher Pena Sr., and brother Justin Pena, drove from their home in Richland to Monticello to participate in the hunt. During the trip, Christopher successfully killed a doe and an eight-point buck.

“He’s the best shot we’ve had out at any of these hunts,” said Harold Griffith, hunt master for the trip. 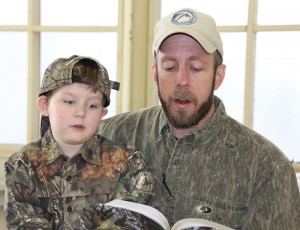 “There are less than 200 cases that we know of in the world,” said Kristi.

The disease did not receive a name until 1996, but it existed, Kristi said.

“Until recently, it had a 100 percent mortality rate by the age of 3,” Kristi said.

Kristi said Christopher takes 32 doses of medicine a day and two injections a week. He was born in severe heart failure, and was not expected to live past six months, she said.

“Today, his heart is functioning on the low side of normal,” Kristi said

Christopher spent the first 15 months of his life as a hospice patient.

“They said we weren’t going to see his first birthday, so for the first little bit of his life, we celebrated his birthday every week,” Kristi said. “Before you knew it, his first birthday came and it was an immense joy. That being said, we still have to live with the uncertainty of not know what is going to happen.”

GP of Monticello and the Catch-a-Dream Foundation held a small ceremony in honor of Christopher Saturday.

Catch-a-Dream operations manager Brian Chisholm spoke on behalf of the foundation and presented Christopher with a Bible and a plaque inscribed with the scripture Isaiah 40: 31: “But those who hope in the Lord will renew their strength. They will soar on wings like eagles; they will run and not grow weary; they will walk and not be faint.”

Christopher is the youngest child to participate in a Catch-a-Dream sponsored hunt, Chisholm said. When Catch-a-Dream discovered how important hunting is to the Pena family, it could not help but make an exception to its rule that participants must be between the ages 8-18, he said.

The Pena family voiced their appreciation for the project.

“When you start planning your family, you start thinking about what you and your sons are going to do,” Christopher Sr. said. “When my boy was born, and we got the news that we got, it’s like all those hopes and dreams get snatched away from you. This is one of them special milestones that they told us we’d never have.”

Christopher Sr. said he is an avid hunter, but taking Christopher deer hunting was one milestone he could not have accomplished by himself.

“I don’t expect anyone to understand what our family and Christopher deals with everyday,” Kristi said. “But to be able to come and have not only the hunt, but the rest of the time away from the doctor’s offices and waiting rooms — we still have to take the medicine with us — but to have this time to just be normal, I can’t describe how much that means.”

Catch-A-Dream is based out of Starkville but has roots in Brookhaven through noted Mississippi outdoorsman, author and sculptor Bruce Brady. While battling cancer, Brady became deeply concerned that the world’s largest children’s wish-granting organization, the Make-A-Wish Foundation, established a national policy that precludes granting a child a wish that involved hunting or use of “… firearms, hunting bows or other hunting or sport-shooting equipment.”

Brady envisioned a program that would fill this gap and provide life-changing outdoor experiences for terminally ill children.

Although Brady died before his vision was anything more than an idea, Catch-A-Dream was founded in 2000 by a small group of outdoorsmen who embraced the idea and created what quickly became a nationally recognized foundation.

GP Monticello has annually hosted a Catch-a-Dream trip, allowing children and their family to stay on site and hunt or fish on 1,600 acres of the 2,200 acre Monticello containerboard property that are actively managed for wildlife and recognized by the Wildlife Habitat Council’s as a “Wildlife at Work” program.