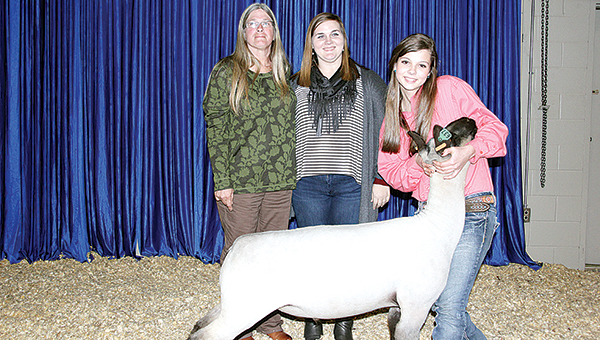 Editor’s note: An incorrect version of this story was published in Wednesday’s edition. The version below is correct.

The evening consisted of a steak dinner served by a local cooking team, a silent auction, an auction of more than 20 cakes and the sale of 20 livestock animals.

Rachel McDaniel, 17, of the Lincoln County T-Bone club presented her Hampshire lamb for auction as the Supreme Champion Market Lamb. McDaniel’s lamb sold for $1,550 to Terry and Libby StAmant.

“I was really surprised,” McDaniel said. “I’ve never had that good of a sale at this sale before.

McDaniel was also awarded a $1,000 4-H scholarship based on her leadership skills, attitude in and out of the show ring and her show performance. She will use her scholarship to attend Mississippi State University next fall as an animal dairy science major.

MSU 4-H/Youth extension agent Brandon Alberson said the community is the driving force behind the success of the 4-H and FFA programs in Lincoln County.

“We’ve got a great community here that comes out and just shows a lot of support for us,” Alberson said.

Alberson said the Sale of Champions provides a way to build the confidence of the Lincoln County 4-H and FFA students.

“They’re learning those life skills and they’re learning to get outside of their comfort zone,” Alberson said. “We’ve got a lot of kids here that are really shy, so this kind of brings them out a little bit. I know, personally, I was that shy 4-Her that if it wouldn’t have been for 4-H, I wouldn’t be where I am today, and I think I’m seeing that similar thing happening with our kids today.”

The following are the results from the Sale of Champions:

•Supreme Champion Market Steer shown by Will Watts sold for $4,100 to the Brookhaven Mill.

In addition to the sale, Braxton Thompson and Rachel McDaniel were each awarded a $1,000 4-H scholarship.