‘Buck has to stop somewhere’ 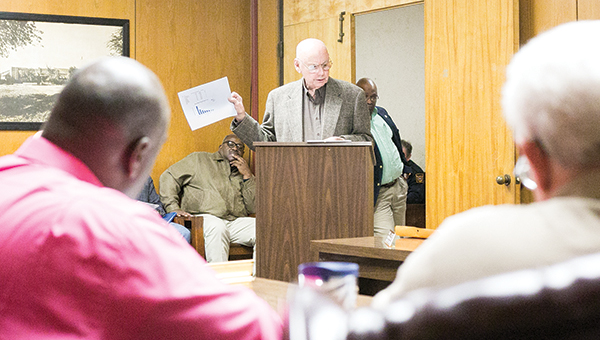 Photo by Kaitlin Mullins / Johnny Perkins addresses the board during Tuesday night’s Board of Aldermen meeting about his concerns over Brookhaven’s murder rate.

A concerned citizen addressed the Brookhaven Board of Aldermen Tuesday night to discuss crime, specifically murders.

Brookhaven resident Johnny Perkins was prepared with research and talking points that spurred some discussion on the crime issue — which is not exclusive to Brookhaven.

“It’s surprising to me that is our rate is that much higher than even the towns that we normally consider [having a high crime] New Orleans, Jackson all these other places we consider to have a lot of crime, our rate is higher than theirs,” Perkins said.

City Attorney Joe Fernald cautioned that statistical analysis is not as simple as it may seem, as some cities don’t report everything that would speak to their murder or violent crime rate. For that and other reasons influencing the information presented, efforts, including Fernald’s, to compile accurate and thorough data have begun.

Perkins said the board should utilize more of the influence it has over the police department. A work session addressing requests made by Police Chief Bobby Bell for more funds to hire and pay officers at the competitive rate is scheduled before the next board meeting on Feb. 2.

“Murder is bad, bad, bad, and we all know that there are people being killed that shouldn’t be, and someone is responsible,” Perkins said. “And the buck has to stop somewhere, and I don’t know where else to go but to you all, and I would ask y’all to take that under serious consideration: what we can do to get more boots on the ground, more policemen.”

Bell said while the sentiment coming from Perkins is well founded, the data he presented was misleading and/or inaccurate.

“I agree with a few things Mr. Perkins said but just a few,” Bell said. “Mr. Perkins is a good man, but he’s not accurate. He doesn’t see what my officers go through. And as far as his tallies — I don’t know how true they are. He said he got them from the paper, you know I don’t how true they are.”

When asked what information Perkins presented was incorrect, Bell declined to comment.

Fernald mentioned the current drug court system and its success despite heavy opposition when it began. Fernald suggested that the problem isn’t locking people up, it is a more pervasive and systemic issue.

“He does the job he does, but he can’t be there before they start,” Fernald said.

Brookhaven recorded 10 homicides in 2015, a large increase over previous years.