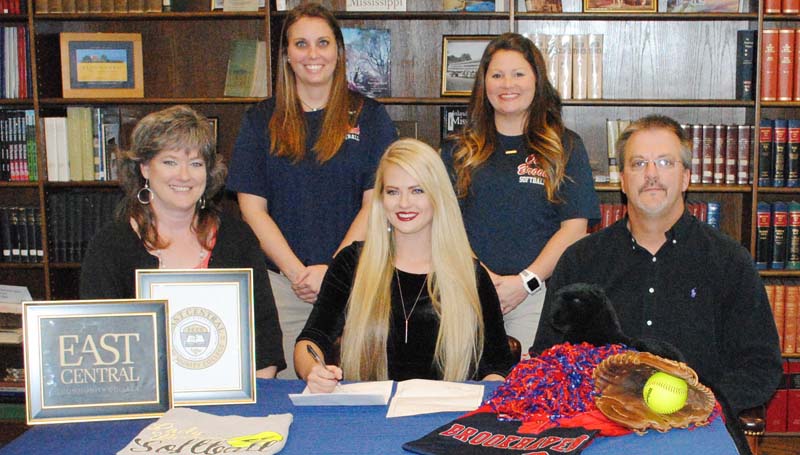 “I’m excited to have the opportunity to play softball at East Central,” said Shell. “When I went on my college visit, I felt comfortable with the coaches and the other players.

“I really enjoyed the atmosphere at their campus,” said Shell. “The thought of playing with an up-and-coming program really excites me. It was a tough decision, but I prayed about it and discussed this with my parents before making my final decision.”

Shell said she wants to pursue a career in biology/pre-med.

As a junior, Shell posted an 15-4 record for Brookhaven with 81 strikeouts and 38 walks in 108 innings pitched. As a batter, she had a .382 average on the season with five doubles and three home runs.

Shell has been a member of the Ole Brook fastpitch team for six years and has received numerous awards for her performances on the diamond in slowpitch and fastpitch softball.

Academically, Shell is in the top of her class with a 3.9 grade point average. She serves on the National Honor Society and she is the Student Council president. She has also been named a Wendy’s High School Heisman winner and a Southwest EPA program representative.

“We are extremely proud of Katherine for signing with East Central,” said BHS coach Mandy Vinson. “She has been a big playmaker for us over the last six years. We will miss her leadership on and off the field next year. She is a student of the game and has a tremendous love for it. She has been really fun to coach. We wish her the best at East Central.”

Shell is the daughter of Matt and Lucy Shell.