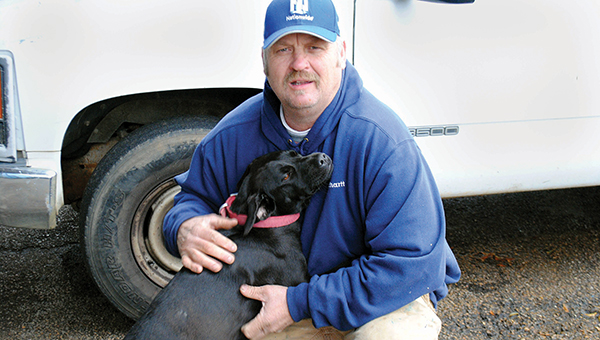 Photo by Aaron Paden / Darryl Davis and Oreo are currently working at Perkins Hardware. Davis refuses to take a job where his dog is not welcomed.

Darryl Davis loves his dog Oreo, and Oreo loves him. Davis is a plumber and electrician, and he takes his dog with him on jobs.

“If my dog’s not welcome, I just roll along,” Davis said. “I respect people. If they don’t want a dog in the house or a dog in the office, I understand that. But, I live in a world where if an animal ain’t welcome, I can move on.”

Oreo has become well-known at the Inez in downtown Brookhaven where Davis often does work.

“It was really hot this summer, during some of the hottest days of summer,” Inez 101 Salon owner Lori Perkins said. “So we let Oreo come in here, and we would give him water, so everybody in here got to know him, too. But he is very attached to Darryl. He sits and watches out the window, and if he sees Darryl out there, he goes crazy. Or if he sees Darryl drive off — he knows he stays in here some — then he gets very excited. He just comes and goes.”

Davis said he took Oreo in after the dog showed up on his doorstep one day.

“He met me one evening, and when he did, I bent down and played with him with my left hand,” Davis said. “I took this here smart phone and snapped pictures with the right hand. I was going through the pictures and one of the pictures that came out was unbelievable. The picture was just the saddest eyes. I just looked at it like he’s telling me, ‘You mean to tell me there may be a no between us?’ That picture sealed the deal. He had his shots and rabies and heart worms and all the next day.”

Davis said he’s had two other rescue dogs, both of whom lived about 14 years.