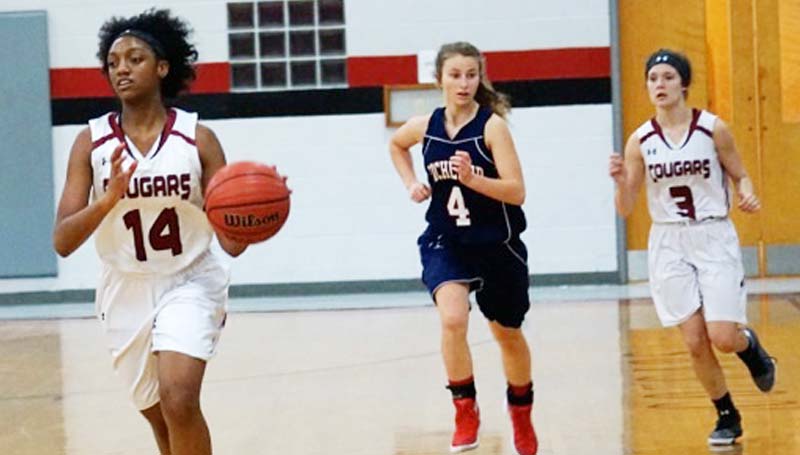 MONTICELLO – Lawrence County swept a Region 6-4A basketball double-header from Richland Tuesday night. In girls’ play, Vicki Rutland’s Lady Cougars beat Richland 53-46 in a dandy game. In boys’ action, Pat Bridges’ Cougars had no trouble with Richland, dispatching the Rangers by a 53-22 score.

The girls’ game featured two teams that entered the game winless in Region 6-4A play. Richland was 0-5, but had played very close games against South Pike and Florence, two of the top-ranked 4A teams in the state. LCHS was 0-4, with three second-half collapses spoiling superb first-half efforts against strong region foes.

It all added up to a very good game. Lawrence County overcame a slow start to grab a 26-25 halftime lead. The Lady Cougars then cast aside their second-half demons and held on in a tough, tense second half.

Camryn Davis led LCHS with 21 points and eight rebounds. Zipporah Baylis added 13 points, three assists, and five steals. The Lady Cougars were buoyed by the return of senior Jada McDuffey, who had missed the previous three weeks with a knee injury. Lawrence County improved to 12-9 overall, and 1-4 in region play.

“It was obviously good to get that division win,” said Rutland. “I thought we played a decent game tonight. Richland is a very big, capable team. There are no easy wins in our division.”

The Lady Rangers were led by 6-foot-1 center Azaria Howard, who scored 14 points. Richland is coached by Chimere Turner.

In the boys’ game, after a slow start offensively, Lawrence County had an easy time of it. The game was tied 8-8 after one quarter. After that, Richland went almost an entire half without scoring. The Rangers failed to score at all in the second quarter, and went the first 6 minutes of the third without score. While Richland was stuck on eight points, the Cougars pulled away.

Phillip Moore led Lawrence County with 13 points, 11 of them in the first half. Keyshawn Feazell scored all 12 of his points after the intermission. Feazell also had five rebounds, three blocked shots and two assists. Gabriel Lewis added eight points and four assists.

The Cougars ended the first half of the division season with a record of 4-1, trailing only undefeated and top-ranked McComb. The Cougars are 14-7 overall.

Richland, coached by Russell Marsalis, fell to 9-8 overall, and 2-4 in the region. The Rangers’ shooting woes extended to the free throw line, where they made just one of eight attempts.

Lawrence County will host Florence in Region 6-A play on Friday. Richland will host South Pike.