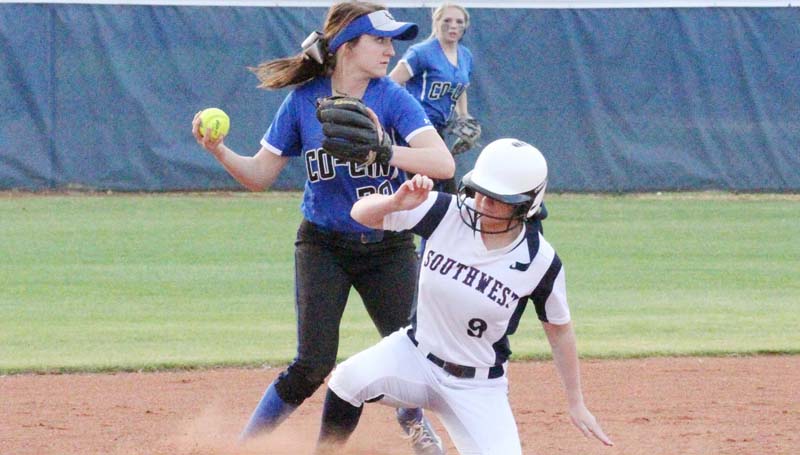 SUMMIT – The Co-Lin Lady Wolves racked up 20 runs as they swept the season-opening doubleheader 9-7 and 11-0 against the Southwest Lady Bears Monday afternoon. Five different Co-Lin players hit home runs in the two games, including a grand slam from Brittany Barbay.

Co-Lin opened strong plating four runs in the first inning. Trevlyn Scott, in her first colligiate at bat, hit a three-run shot deep into right center. This was the first of many home runs to come for the Lady Wolves. Southwest answered, bringing in one run in the bottom of the first. In the top of the third Diana Hobgood added more runs with the deep ball, after a two run shot. The offense continued to click as Kaitlyn Taylor added a solo shot to left in the fourth. Going into the bottom of the seventh inning, Co-Lin had a comfortable lead 9-3.

But the Lady Bears would try to mount a rally in the bottom of the seventh. A two RBI double by Southwest’s Gianca Holmes cut the Co-Lin lead to 9-5. Two more runs would cross the plate for Southwest before Taylor provided two strikeouts to end the contest.

“We hit the ball great, I was just a little disappointed with our late defense in this game,” said Co-Lin head coach Allen Kent.

Absorbing the loss for Southwest was Mary Fulton. She allowed six runs on nine hits, struck out none and walked none in 2.1 innings. Gianca Holmes pitched 4.2 innings allowing one earned run on four hits and struck out one.

In the second game, it was all Lady Wolves. Sophomore Brittany Barbay hit a grand slam in the first inning to put Co-Lin up 4-0.

Kamryn Vanlandingham’s RBI sacrifice fly would add another run in the second inning.

By the end of an eventful third inning the Lady Wolves led 9-0. Crum would add a fourth inning solo home run, and Kayla Britt knocked the final run in the fifth.

Southwest had no answer for Co-Lin pitcher Trevlyn Scott. Southwest managed just one hit. Scott also allowed no earned runs, walked none and struck out one during her three innings of work. Kamry Creel pitched the final two innings allowing no runs, two hits and struck out one.

“I was very pleased with Scott and Creel in the circle today. We were also disciplined at the plate, and hit well throughout the line up,” said Kent.

Rebecca Davis suffered the loss for the Lady Bears. She allowed 11 runs on 16 hits, struck out two, walked one in five innings of work.

Co-Lin will host Itawamba for a doubleheader on Sunday, beginning at 1 p.m.