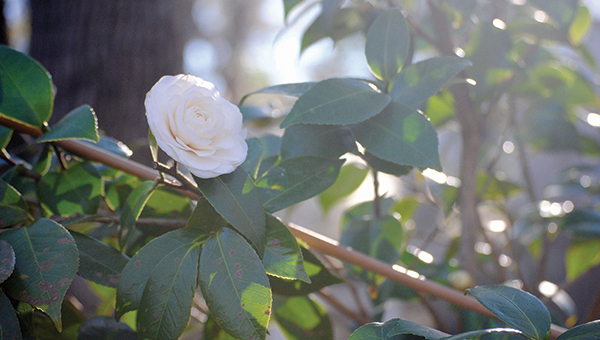 Photo by Aaron Paden / Ward 4 alderwoman Shirley Estes has many varieties of camellia in her garden. The annual Camellia Show will be held Saturday at the Brookhaven Recreation Department

“It’s an opportunity for people to see a lot of blooms in one place, and then to also have an opportunity to go out and buy a camellia if they want to,” show chairman Homer Richardson said. “But it’s mainly to come and see camellias.”

“We do the judging, and then it’s open to the public from 2 p.m. to 5 p.m. on Saturday,” Richardson said. “No tickets. It’s all free. We’ll also have a vendor that’s bringing in camellia plants that will be available from 8 a.m. until when we finish up that afternoon, so if people want to look around at some of the blooms and buy a plant, they can do that.”

Richardson said there should be several hundred blooms at the show.

“We have people who grow camellias that’s coming all the way from Florida, Alabama, Mississippi and Texas and they bring blooms and they come in to also judge the shows,” he said.

The camellias are then judged in categories according to size.

“Then the winners  — the best of the best — go to the head table,” Richardson said. “They will have individual prizes for each of these. Best Lincoln County, for example.”

Richardson said he and his wife fell in love with camellias when they moved to Brookhaven in 1989.

“They’re one of the few plants that bloom in the winter time. You don’t see many of those if you get to be too far up north, because it gets too cold for them to be growing outside. You can grow them in a greenhouse. We were down here and we saw a camellia show that was advertised in the newspaper. She went down there and won a camellia, and from that point on we have been planting camellias, growing camellias, showing camellias and judging camellias.”

Richardson said people are drawn to camellias because of their huge variety.

“These can go all the way from white to pink to red and all shades in-between,” Richardson said. “The other variety is the sizes they can be. They can be an inch and a half across or nearly as large as 8 inches in some cases. It’s just so many different forms of them. So I think that makes them sort of unique. So many varieties. There’s over 50,000 named varieties of camellias.”

The Camellia Show in Brookhaven is one of only two in Mississippi, according to Richardson.