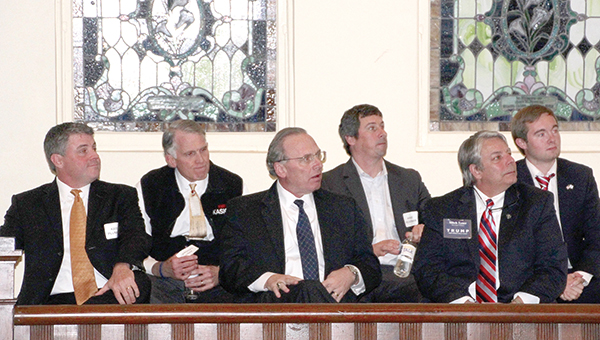 Republicans from all over Southwest Mississippi gathered at Ole Towne Church Thursday to hear from representatives of six presidential campaigns.

Cindy Moore, president of the Lincoln County Republican Women and an organizer of the event, said the night proved to be a success, with more than 120 residents of Southwest Mississippi in attendance.

“It is very important for Lincoln County to educate the community in regards to the platforms of the presidential nominees,” Moore said. “Part of the purpose of the Lincoln County Republican Women is to host events such as this because we all need to be more informed voters so that we can make better decisions during elections.”

Moore said she hopes the forum piqued the interest of individuals wanting to know more about each Republican candidate.

“The interest was in the speakers themselves, and people wanting to know more than just the normal, this is why you should vote for my candidate, rather shallow, answers,” Moore said. “Tonight’s event, with individuals knowing that we were asking specific questions about each campaign and that the speakers were going to be addressing the guests more than two or three minutes, that was part of the appeal to them. They want real answers and not just the general thing when you turn the television on.”

The representatives present at the event addressed major issues including the Affordable Care Act, Second Amendment rights and education reforms. They were also asked to explain why they chose to represent their candidate. The speakers were as follows:

“With respect to the border situation, that is a big one,” Plunkett said. “It’s obviously one of the main driving factors in this campaign so far. The most pressing issue with the respect to border security, right now, is our southern border. The problem we are seeing is now is that people are overstaying their visas. Some 40 percent of our illegal immigrants, right now, are those who have overstayed their visas. We need a system that allows us to keep up with our immigrants, even the legal ones, so they do not overstay their visas and you know where they are. If Google can map every street in the city of Brookhaven, then we should be able to keep up with where our immigrants are in this country. If you can get on Amazon and FedEx and track your package within a half a mile from your house, then we can keep up with those immigrants.”

“Absolutely, immediately, as quick as possible, he will eliminate the Department of Education entirely,” Tyner said. “Common core under Donald Trump will be no more. The Department of Education is taking advantage of us, it is sending our money up there, and then they turn around and give it back to us, so getting rid of the Department of Education is wonderful. On higher education, college, the cost of college is outrageous now. The important thing is that that also is not part of our federal government. Our colleges are run by our states, and it will be a cold day when Donald Trump says he’s going to start taking care of colleges out of Washington D.C. We don’t need anymore core curriculum coming down here.”

“He’s got an A plus rating from the NRA and that’s the gold standard,” Ross said. “If he gets elected, the first thing he’ll do is appeal the Obama executive orders, unconstitutional executive orders. If we enforce the gun laws on the board, folks, we don’t need anymore. And the truth of the matter is, gun laws prohibit law-abiding citizens from getting guns. The do nothing to prohibit people who are going to break the law anyway from getting guns.”

Each representative spoke on their candidates’ view pertaining to each issue, but in the end, Hederman encouraged all Republicans to collaborate in the end.

“Everybody is going after Marco Rubio because they know he is the threat in the nomination,” Hederman said. “He has that momentum to be that candidate to win it. I truly believe this is a three party race at this point. I believe this is a Trump, Cruz, Rubio race. Everybody has ideas, we’re all on the same page, but look at it as who will win it this November. It is very important for us as a party to be able to be able to come together and pull that off.”

The campaign representatives spoke at a pivotal time, as the Mississippi presidential preference primary election will be held on March 8. The results of the election will determine how Mississippi delegates cast their votes at the Republican National Convention in July.

“The candidates realize that Lincoln County is a strong-hold Republican county in Southwest Mississippi and so they were very interested in coming tonight,” Moore said.

A reception concluded the event, where campaign representatives were available to answer individual questions and meet with the public.