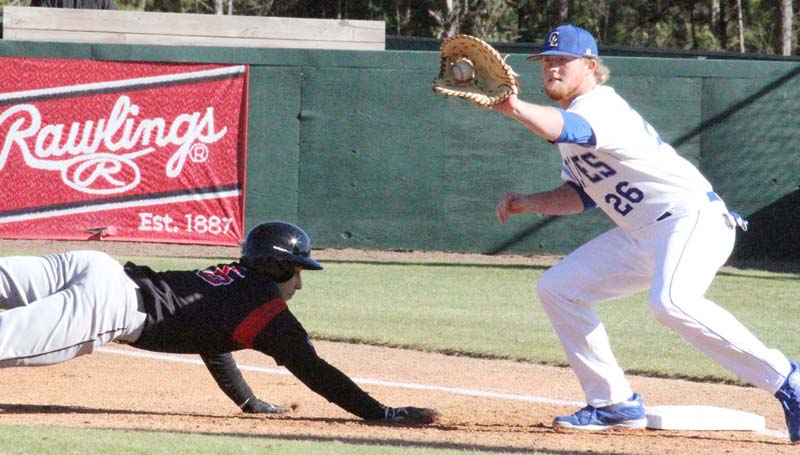 WESSON – The Co-Lin Wolves dropped their season opening doubleheader to the Mississippi Delta Trojans 8-7 and 10-9 in baseball action on Monday.

The Wolves will travel to Vidalia, Louisiana on Tuesday to play a double header against LSU-Alexandria.

With two outs in the top of the seventh inning, Mississippi Delta’s Weber Herberson two-run home run over the left field fence to the Trojans the 8-7 win.

MS Delta started the game scoring one run in each of the first two innings.

In the bottom of the third, Austin Irby RBI single center field that scored Kewan May to pull the Wolves to 2-1.

In the fourth inning, Co-Lin’s Tyler McLeod fielder’s choice to short that allowed Reed Taylor to cross the plate tying the game at 2-2.

The Trojans would plate two runs in the fifth inning on a fielding error by the Wolves. Co-Lin would answer in the bottom half of the inning scoring two runs of their own. Trojan pitcher Lee Quates walked the first three batters in the inning to load the bases then hit designated hitter Reed Taylor to score Irby. With two outs McLeod’s RBI single to left field scored Jordan Antley to tie the game at 4-all.

MS Delta continued their hot hitting scoring another two runs in the top of the sixth to take a 6-4 lead. The Wolves battled back and grabbed three runs in the bottom of the sixth with solid basing running. With one out May and Irby drew walks and advanced on a wild pitch. Antley drew a walk to load the bases. May scored on a wild pitch and Irby stole home to tie the game at 6-all. Taylor reached first on a dropped third strike that scored Antley to put the Wolves up 7-6 going into the top of the seventh.

With one out, Delta’s Jake Hartman singled and advanced to second on a balk. Herberson hit a deep shot over the left field fence to put the Trojans up 8-7. The Wolves threatened in the bottom of the seventh. With two outs, T.J. Wright drew a walk, but the Wolves were unable to drive him in.

McLeod led the Wolves at the plate with two hits and two RBIs. Adding support with a single apiece were Irby (1 RBI), Taylor (1 RBI), Wright, and May.

In the nightcap, defense plagued the Wolves in game two as they committed six errors. MS Delta took an early lead after plating two runs quickly in the first inning. Co-Lin would take a 3-2 lead in the bottom half of the inning. With one out, McLeod doubled to centerfield. Jeremy Moore followed with a single to advance McLeod to third. After Moore advanced to second on a wild pitch, Reed walked to load the bases. Kody Smith drew a walked that plated McLeod. Matthew Mordecai reached on a fielder’s choice to score Moore to tie the game at 2-all. An error on a pickoff attempt scored Smith to give the Wolves the lead.

Co-Lin would extend the lead to 4-2 in the second inning. Champ Davison led off the inning with a single to right field, May sacrificed Davison to second. Irby’s RBI single to center to score Davison.

MS Delta’s bats would come to life in the third inning as they tied the game at 4-all with a pair of sacrifice flies.

Co-Lin would try and rally in the bottom of the seventh inning. With one out, Davison and May would draw back-to-back walks and advance to second and third on a wild pitch. Irby drew a walk to load the bases. A two run error on Moore’s grounder to the shortstop plated Davison and May. But the Wolves would leave Irby and Moore stranded on base.