Reclaiming what was lost: Group works to restore cemetery 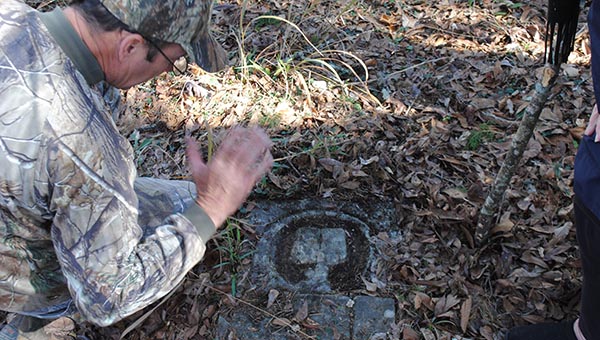 Descendants of a War of 1812 veteran are hoping to restore a cemetery lost to time and history.

Descendants of Capt. William Smith are trying to raise awareness of the old Sarion Cemetery, where Smith is buried, and its decrepit state. The cemetery is also known as the Saron Cemetery,  among other names, but was referred to as Sarion in historical  documents.

A committee of descendants consisting of Dr. Miller Hammill, J. Ronny Smith, Ronald Smith and Truly Earl Smith has been formed to carry out the restoration of the cemetery. They are hoping to receive help from anyone wishing to participate.

Norma Hammill, a descendant of Smith, said that her and her husband have always known that the cemetery was there.

“I’ve known that it was there for a long, long time and my husband certainly knew that it was there,” Hammill said. “At one time Steve and Jan Melancon — my neighbors — had done some work trying to get it cleaned up. I don’t know the details of why that project he initiated fell through.”

Smith had 10 children and therefore has many descendants, Hammill said.

“I wouldn’t even attempt to name a number,” Hammill said. “ There are a lot, a lot of people that are descendants in Lincoln County.”

Hammill said the goal of the committee now is to identify as many gravesites as possible, clean the cemetery up and then create a better way for visitors to access the cemetery.

“One thing I think it’s important for us to honor,” Hammill said. “First to recognize the role that he played in the War of 1812 because records indicated that he is the only solider from Lincoln County that fought in the War of 1812. I think it’s just important that we respect and honor our forefathers. And one of the ways we do that is making sure their grave has a marker. And the grave is kept up.”

Hammill said most of the tombstone names are not legible and are broken.

“You say, well why wasn’t it kept up,” Hammill said. “Well this, he fought in the War of 1812, but historically another very significant event took place in the 1860s and that’s the Civil War. And even though Lincoln County probably was not the site of a major battle, it affected people. I don’t think you and I could even imagine how it affected people. Of course there was the Civil War and then in the ‘30s there was the Depression and so people just did not have the means to take care of it and to get tombs and all those things. It’s not that they didn’t care. There just wasn’t the means financially to get that.”

The only reason Smith’s tombstone is legible is because it was erected in 1939, Hammill said.

Melton Allgood, Smith’s great-grandson, supervised the dedication of the monument furnished by the U.S. government through the American Legion and the Veterans of Foreign Wars.

“Melton Allgood was the one that was instrumental in getting that done back in 1939,” Hammill said. “If it had not been for his work there would not be a marker at all.”

A group of about 15 descendants, led by Johnny Jackson, the motivator behind the project, and the committee, recently had a workday to clean up the cemetery, Hammill said. District 4 Supervisor Eddie Brown and District 5 Supervisor Doug Falvey both attended the workday.

“Because of where the cemetery is, it is close to the line between District 4 and 5,” Hammill said. “I think they actually determined that it’s in District 5, but maybe some of the ways to get into it are in District 4. Both supervisors were there and both said that they would work with us to determine the property lines. Of course, I think just their support and them being there meant a lot to try to get this project underway.”

The cemetery is located west of Brookhaven.

“I don’t know what we are going to do next financially,” Hammill said. “My husband hoped that maybe we could get a grant. Now, I don’t know if that’s a possibility or not. We sill have a lot of things to work out, but I think right now if we can just get interest in it, a renewed interest, it would help.” 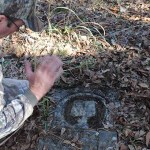 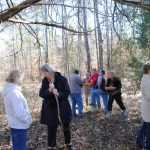 A member of the group brushes leaves off a marker in the old Sarion Cemetery. Photos by Aaron Paden.