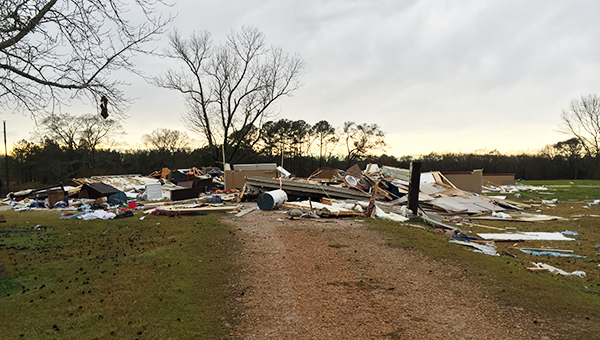 Copiah County was hit by an EF2 tornado with 130 mph peak winds, the NWS confirmed on Tuesday. The tornado had a path length of 30.8 miles and path width of 250 yards.

The strongest damage the NWS Jackson storm survey crews found by Tuesday afternoon was in the Stronghope community, where a house was destroyed.

Copiah County Emergency Coordinator Randall Drane said Tuesday afternoon that most of the Stronghope community was without power. They are hoping it is restored Wednesday.

Drane said as of Tuesday afternoon all roads are open and though the county was strongly affected by the severe weather, there were no injuries reported.

“It was just one of those things you can’t predict and it just throws down on you,” Drane said. “Luckily we had no injuries. Fortunately we have the volunteers we have, as well as the citizens and volunteer organizations that are more than willing to come out and assist during these times of disaster.”

There were minor injuries reported after people were reportedly thrown from a mobile home on the Copiah and Lincoln County line that was destroyed. The mobile home, located at 3779 Jackson-Liberty Road, served as a daycare run by Ashley and Ryan Terry. Ashley said they were inside with three children when it was blown over.

The 3rd confirmed tornado is in Copiah Co. Prelim. info: EF-2, 130 mph peak winds. More path/width info will be available as it filters in

@kaitlin_daily Strongest damage found thus far has been in Stronghope with a house completely destroyed.

@kaitlin_daily We plan to. We just heard from our survey crew. They are still surveying but it is a prelim EF2 with 130mph winds.