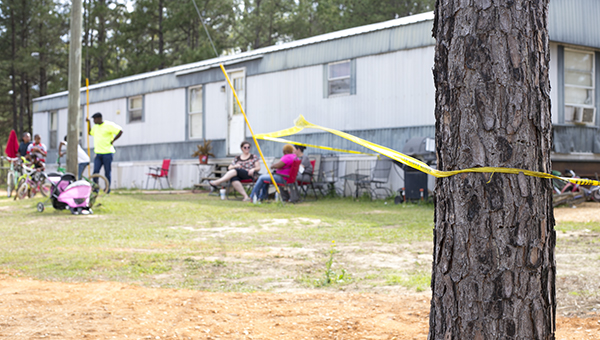 Photo by Kaitlin Mullins / Fred Hill III was found guilty of murdering Timothy Green outside his home on April 2, 2015, on Spur Lane. Hill will not be eligible for parole for 75 years.

After a two-day trial, the Lincoln County man charged with murder in an April 2 shooting on Spur Lane was found guilty on all counts and was sentenced to life in prison.

Fred Hill III, 24, of 1515 Spur Lane, was indicted for first-degree murder in the death of Timothy Green, 31, also of Spur Lane. Hill was also indicted for shooting into a dwelling and possession of a firearm by a felon. His trial, presided over by Circuit Court Judge David Strong, began Tuesday and ended Wednesday evening with a verdict of guilty on all counts.

Hill was sentenced on Wednesday to life in prison plus five years for shooting into a dwelling and five years for possession of a firearm by a convicted felon. The terms are to be served consecutively, so Hill will serve 65 years and then an additional 10 years before he can petition for parole.

District Attorney Dee Bates prosecuted the case and said while the emotionally draining trial ended in a victory for the state, nothing can restore what was lost.

“I truly appreciate the jury’s attention to the case. I know it took two hours to deliberate and it’s very difficult. The sad thing is, parents lost their child by unjustifiable homicide,” Bates said. “The family actually discovered him, and they testified — it’s been a grueling process for them. And I hope and pray they can have some closure.

“We feel like, we being the state, we met the burden — but it can’t bring their child, their young adult son back. But hopefully it’ll bring them a little closure,” he said.

In an interview at the scene on the day of the murder, Green’s father, Ezzard Campbell, said he spoke with his son’s killer only a short time before shots were fired early that morning. Campbell said Hill came to his residence and told him about a dispute between the two. Campbell said Hill was threatening violence and said he was going to kill Green, but he never imagined his neighbor would actually murder the father of three.

“And I come home, and he just kept riding in my driveway. My son was walking in the woods. He hid out in the woods, and he shot my son in cold blood. I watched him shoot my son, not knowing, you know. I thought maybe he shot in there in a different direction,” Campbell said, shaking his head.

Campbell said 20 minutes later his daughter came in to the house and to the backyard, where Green was found.

“I watched him walk back there… I should’ve, I don’t know,” he said, visibly distraught. “I watched him. It’s just a tragedy. It’s hard for me to understand, you know, it’s just something to take a human life. It’s just hard.”

Lincoln County Sheriff Steve Rushing said the call came in at 1:50 a.m. on April 2 that a subject had been shot on Spur Lane. When the sheriff’s department and ambulance arrived on the scene, Green was found dead.

“May God let him rest in peace; he was a loving kid,” Campbell said. “To see someone just take your kid’s life like that, for nothing.”

Hill is also facing a separate charge of having a cellphone in jail, for which he was indicted this past summer.