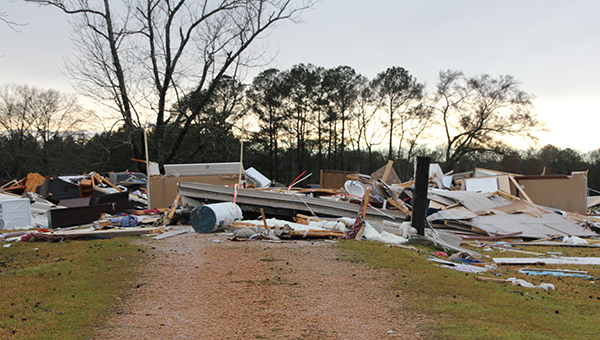 Photo by Alex Jacks / The Terrys lost their home last week as a damaging storm passed through the area.

A week after strong storms produced an EF-2 tornado near Wesson, a Lincoln County couple said they are thankful to be alive.

Though the damage in Copiah County was attributed to the tornado, it was straight-line winds as high as 95 mph that destroyed a mobile home on Jackson-Liberty Road in Lincoln County.

Five people were inside the home when the storm hit. The mobile home was rolled multiple times.

Ashley and Ryan Terry’s home, located at 3779 Jackson-Liberty Road, served as a daycare run by the couple. Ashley said they were inside with three children when it was blown over. Only minor injuries were reported.

“People have blessed us incredibly,” Ashley said of the help following the storm. “We are so overwhelmed at how much love people have showed us this week.”

The couple is currently staying at the Hampton Inn in Brookhaven and has been working on debris removal.

“We’ve been working on going through all of our belongings to salvage any pictures and things that were very special to us,” Ashley said. “We don’t have plans as of now because we’ve been so swamped trying to get things cleaned up and seeing what we could save. We were banged up, so we’ve been slow moving. We just need prayers.”

Ashley encouraged community members to help all those who lost homes or property in the storm. The couple had homeowners insurance, unlike some others.

The weather service reported that the damage in Lincoln County was from straight-line winds, not a tornado.

“An intense microburst occurred along the Lincoln/Copiah County line,” the NWS said. “Damage occurred just west of Jackson-Liberty Road and north of Norton-Assink Road. Other damage that was noted was many uprooted trees along nearly a three-mile swath. All of the uprooted trees were blown down to the east-northeast. Along Old Red Star Road, the roof of a metal shed was blown off and tin was blown into a tree along with some tin peeled off the corner of a roof of another home. The width of this damage was nearly one mile wide with max winds around 95 mph. The damage ended near Foster Lane near the county line.”

The storm came through the area at about noon Feb. 15.

“When the storm passed and it started to get sunshiny, we returned to our house and put the children down for their naps,” Ashley said. “All of a sudden, we heard an awful loud noise and the trailer started shaking. My husband said, ‘Grab the kids,’ and then we were thrown from the house.”

Ashley said her husband shielded them when they landed between their vehicles.

“We ran back to my mother-in-laws and called 911 so someone could check out the children,” Ashley said.

Though April is tornado season in Mississippi, the months of October, November and December are also active. The state has seen several tornadoes this winter, with seven being confirmed on Feb. 15.

Much of the damage in Copiah County was in the Stronghope community. A GoFundMe account has been established to raise money for the victims there. If you wish to donate, visit https://www.gofundme.com/9gmzz6fh.