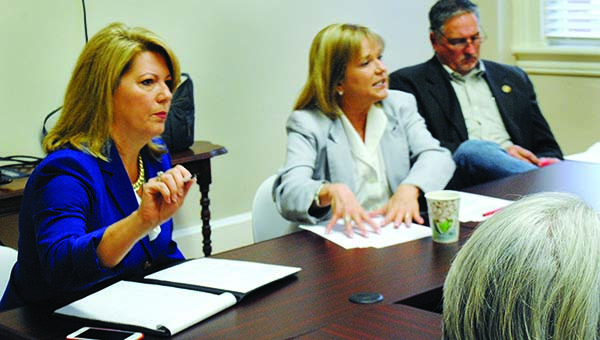 Much of the discussion was about House Bill 943, a measure that would expand the state’s education voucher program to use tax money to pay private school tuition or for home-schooling. Originally the voucher program was only applicable to special needs students.

The bill passed Thursday by the House Education Committee would create education savings accounts for students who qualify, subsidizing children in families with incomes up to 3.5 times the federal poverty level. That’s $85,000 a year for a family of four, well above Mississippi’s median household income of $39,000, according to The Associated Press.

The bill provides $6,500 a year for special education students, $5,000 for students whose families make less than twice the federal poverty level and $4,000 to students from families making from 200 percent to 350 percent of the poverty level.

The money could be spent at any private school that holds class at least 180 days a year, regardless of whether it’s accredited. Children could also be home-schooled, with parents spending the money on education expenses.

“Do you honestly think all these schools are going to accept these children”  Cox said. “That’s where I worry, because how much of our state dollars are going to be tied up in lawsuits because they pick and choose students.

“So many times, we have a solution to something,” he said. “The voucher bill is someone’s solution to something. Any solution that you create creates another problem. You have to step back and see which problem is greater. When we look at these open lines, districts where we can go here and there, and we do those kinds of things — the problems, the havoc this is going to wreak on public schools is going to be enormous. We look at athletics. We look at picking and choosing students. This child gets in, they have room, but this child doesn’t. Who’s going to be sued? Is it going to be Brookhaven School District that’s going to be sued? Even if it’s unfounded, we have to pay for those attorneys.”

Cox also expressed concern that some students would take online courses only to return to public school behind their expected grade-level, citing Mississippi’s Virtual Public School program as an example.

“The reason it doesn’t move quickly and change quickly is because we’re trying these new things on children,”  Cox said. “That’s why we can’t change education overnight. It has to be slow and steady because if you make a mistake, you have a way to back up.”

Under the legislation, students receiving money wouldn’t be required to take tests to measure academic achievement, unlike public school students.

Parents expressed concern that the bill would further the gap between the “haves”  and “have-nots,” suggesting that many parents who need the most help would not be able to pay for transportation.

Currie recognized there was friction between the Legislature and public education groups.

HB 943 was authored by Rep. John Moore, but both Currie and Mangold are listed as co-authors. Doty said it was unlikely that an all-inclusive bill would pass the Senate. Mangold didn’t offer much input during the discussion.

Briefly discussed Monday were House Bill 985 authored by Rep. Greg Snowden and House Bill 49 authored by Moore. Both bills would prohibit school officials and employees from engaging in “political activity”  while on school grounds or while using school property. Neither bill had co-authors listed. Currie said both bills were dead in committee. Doty said there were no such bills in the Senate.