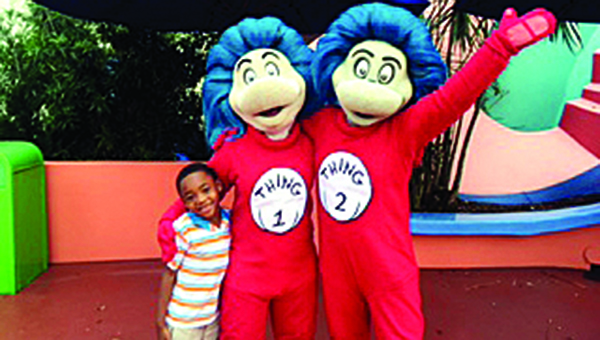 A life-altering disease like sickle cell anemia can affect the way a family functions and often leaves little time for vacations. The Make-A-Wish Foundation strives to provide families with the vacation of a lifetime and did no less for a Brookhaven family.

The youngest member of the Fields family, Dominick, has been battling sickle cell anemia since he was 4 months old. Now 7, Dominick was granted his wish to travel to Disney World in December.

“Make-A-Wish provided everything for us,” Jennifer said. “We stayed at a village called ‘Give the Kids the World’ village, and it was awesome. You had your own place to live, they provided meals. Give the Kids the World Village was like their own little theme park, right there. The staff was wonderful — Make-A-Wish staff was wonderful — sending us off and then they welcomed us home as well. Everything was just wonderful.”

Jennifer said Dominick enjoyed every aspect of the trip. 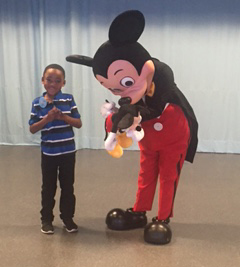 Photo submitted / Dominick Fields gets his stuffed Mickey Mouse signed by the mouse himself during his recent trip to Walt Disney World. Make-A-Wish provided the trip for Fields, who suffers from sickle cell anemia, and his family recently.

Dominick was selected by his doctors and social workers to participate in the Make-A-Wish Foundation wish program because of his monthly visits to Batson Children’s Hospital in Jackson.

“At the age of about 4, he started receiving blood transfusions and that was because he was having — he had a stroke and then also he was having seizures which were caused by high fever,” Jennifer said. “All of this was causing him to be hospitalized.”

Jennifer said since Dominick began receiving blood transfusions he has not spent a night in the hospital.

According to the Sickle Cell Disease Association of American approximately 70,000 people in the United States have been diagnosed with sickle cell anemia.

Sickle cell anemia is a hereditary blood disorder that causes the blood cells to grow in a sickle shape, Jennifer said. The shape of the blood cells makes it hard for them to move through the veins, which can result in clogs and cause pain and other health problems, she said.

In addition to sickle cell anemia, Dominick has Moyamoya disease, which is where the arteries in the brain can constrict, causing strokes in sickle cell anemia patients, Jennifer said.  He deals with developmental delays and ADHA, she said.

Jennifer said before the blood transfusions, Dominick’s biggest struggle was the pain, seizures and hospital visits.

“We had to be on top of anything,” she said. “If he gets sick, we have to be on top of it because it will put him in the hospital. A cold will put him in the hospital. But as of now, with the blood transfusion, it’s just the point of making sure he gets there every month, and of course we’re still on top of any type of sickness. But ever since the blood transfusion, he’s been doing great.”

Jennifer said the trip to Walt Disney World gave the Fields an opportunity to spend time together as a family, without having to worry about her youngest son’s disease for a while.