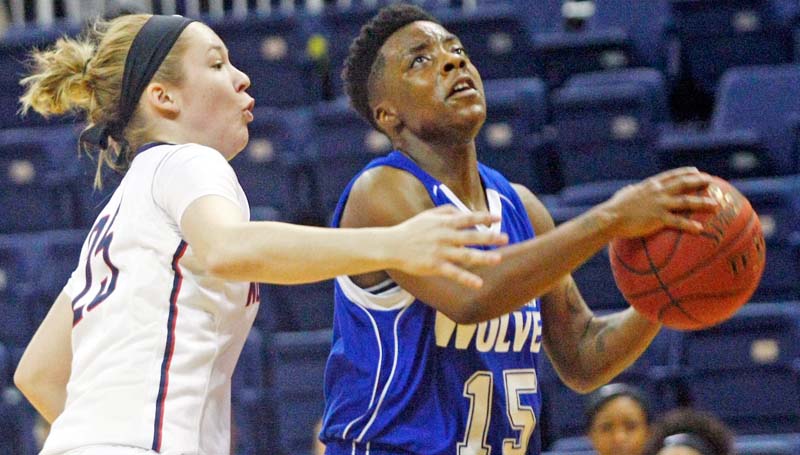 Co-Lin Media / Photo courtesy of JUCOWeekly / Co-Lin point guard Alexis Collins (15) blows past Northwest’s Hayley Davis (25) for the layup in the opening round of the MACJC State Tournament at Itawamba.

FULTON – The Co-Lin Lady Wolves rallied from a 10-point deficit to defeat the North No. 2 seed Northwest Lady Rangers 75-68 Tuesday afternoon in the opening round of the MACJC State Tournament hosted by Itawamba Community College in Fulton.

Co-Lin’s starting five netted 64 of the Lady Wolves 75 points. The impressive shooting started early as the Lady Wolves went on a 7-0 run in the first two minuets of play. The Lady Rangers clawed back in the first quarter tying the game twice, and closed out the quarter only trailing 21-15.

The Lady Rangers to build on their lead in the third quarter, stretching to as many as 10 points. Co-Lin battled back in the final three minutes of the quarter with clutch shots by both Kelley Allen and Alexis Collins.

The fourth quarter was dominated by the Lady Wolves defense. The Lady Rangers were held to only 10 points in the final 10 minutes of play. Late free throws by Jamilah Sanders helped finish the game for the Lady Wolves.

“We did a good job of defending the three-point shot and our guards did a good job shooting the ball outside when we were down by 10,” said Lady Wolves head coach Gwyn Young. “We also made some good passes on the inside and we had a very good combination of outside and inside game, and great sophomore leadership.”

In other opening round action North No. 1 Itawamba defeated South No. 4 Southwest 58-52 and South No. 2 Jones County defeated North No. 3 Holmes 69-58.