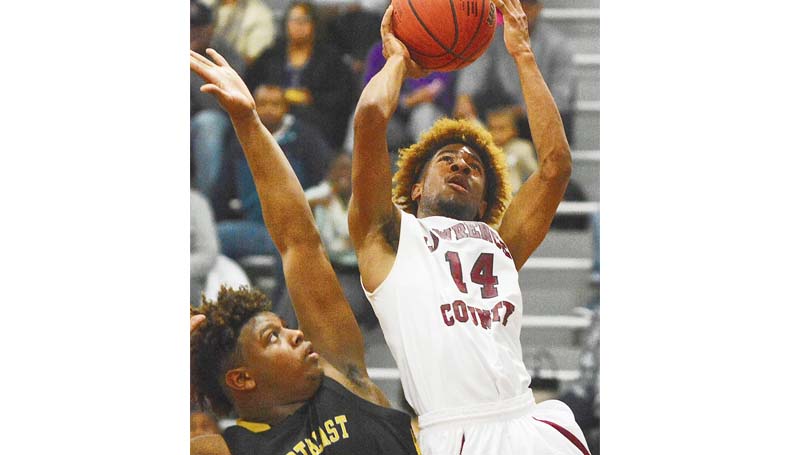 MONTICELLO – Lawrence County rolled to a 72-45 over Northeast Jones in the opening round of the boys’ state Class 4A basketball playoffs Wednesday night at LCHS. Gabriel Lewis hit six three-pointers en route to 24-point night, and Keyshawn Feazell had a double-double, with 23 points and 10 rebounds, to pace the Cougars.

With the win, Pat Bridges’ Cougars improved to 21-9 on the season. Lawrence County will travel to Pass Christian for a second-round game on Saturday. At stake will be a trip to the state 4A tournament in Jackson. The Cougars made it to Jackson last year, falling to Indianola Gentry at the JSU Assembly Center.

As for Wednesday’s game, Northeast Jones jumped to a 10-0 lead, but the Tigers’ glory run didn’t last long. LCHS roared back to lead 31-22 at halftime. Lewis scored 15 first-half points, and Feazell had 13. The Cougars put the game away for good in the third quarter, outscoring Northeast Jones 23-9.

“We had a good night,” said Bridges, “after a slow start. If we want to keep playing, we’ve got to start better than that. All in all, it was a good effort. We’re happy to still be playing.”

Antonio Currie had 13 points to lead Northeast Jones in the Tigers’ final game of the season. Northeast is coached by Davey Hales.