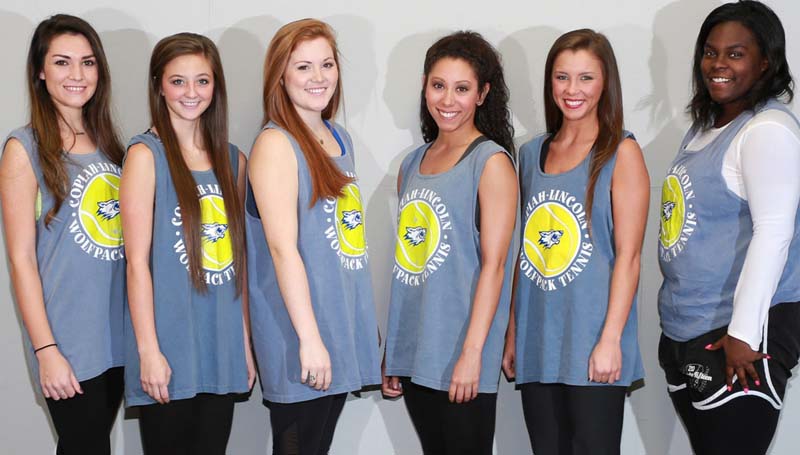 WESSON – Ashley Windom begins her second season as head coach of the Co-Lin Lady Wolves tennis team. Windom is no stranger to the competitive MACJC tennis program as she won four state titles during her time at Co-Lin as a player. Using this experience, she hopes to be a leader for the young 2016 squad. After finishing 2-9 in the 2015 campaign, Windom hopes the returning sophomores will step up and provide leadership while the freshmen class will add depth to the roster.

Brandi McInnis brings her experience back to the team for a second year. McInnis hopes to use the knowledge she gained at the No. 3 singles position a year ago to make strides in her game for 2016. McInnis, a graduate of Wesson Attendance Center, is a very athletic player that can return nearly any shot. Combine these skills with strong work ethic, and McInnis will be a tough foe for any opposing team.

After playing No. 1 singles a year ago, Madison Warren returns to the helm. The Brookhaven Academy graduate is a fantastic leader on the court and is well rounded in all facets of the game. After falling in the quarterfinals last season, Warren hopes to make a deep run in the state tournament.

Chantel Quarles, of Brookhaven High School, Susanna Ratcliff, of Brookhaven Academy, Julie Kramer, of Loyd Star High School, and Bayli Battle, of Lawrence County High School are all newcomers to the squad in 2016. They all bring high energy to the team, and are willing to work hard in order to improve their game. Knowing that the team is young Windom hopes that they can grow and develop this year as the season progresses.

Success in the classroom

The 2015 Lady Wolves finished as the NJCAA’s No. 2 Academic Team in the nation and No. 1 in the state with a 3.68 team GPA. This is the fourth consecutive year the Lady Wolves have finished No. 2. Windom hopes this trend of academic excellence continues with her time as head coach. It shows that Co-Lin truly focuses on the student portion of student-athletes and strives for greatness on and off the court.