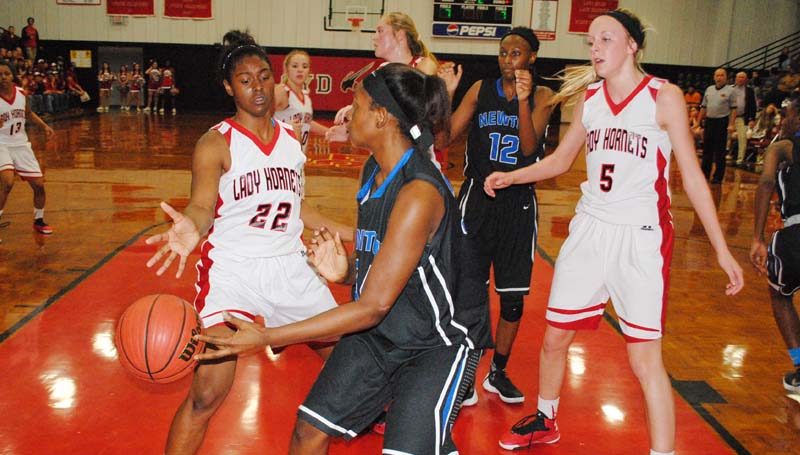 The Loyd Star Lady Hornets suffered a heart-breaking, 59-47 season-ending loss to the Newton Lady Tigers Friday night in the second round of the Class 2A playoffs.

The Lady Hornets conclude their season with a 22-2 record overall, but finished unbeaten at 10-0 in Region 7-2A action to win the division crown.

Newton came out with a strong defensive push to claim an early 14-6 lead.

In the second, both schools traded baskets with Newton winning the scoring spree with a 13-12 run to take a 27-18 lead into halftime.

In the third quarter, the Lady Hornets dominated with a 16-7 surge to tie the game at 34-34 at the end of the period.

Newton reclaimed control of the game with a 6-0 run in the first minute of the final quarter. The Lady Tigers outscored Loyd Star 25-13 in the fourth to eliminate the Lady Hornets from the playoffs.

“This was a tough, physical battle until the very end,” said Loyd Star coach Gene “Moochie” Britt. “The girls fought hard throughout the game and they did a great job fighting back in the third quarter to tie the game up. In the fourth, Newton’s defensive pressure just took us out of our game early and we could not recover in time. Overall, I was very pleased with the girls’ effort. I am very proud of our accomplishments we had this season and we have nothing to be ashamed about.

“I would also like to thank the fans and the students for coming out tonight to show their support,” said Britt.