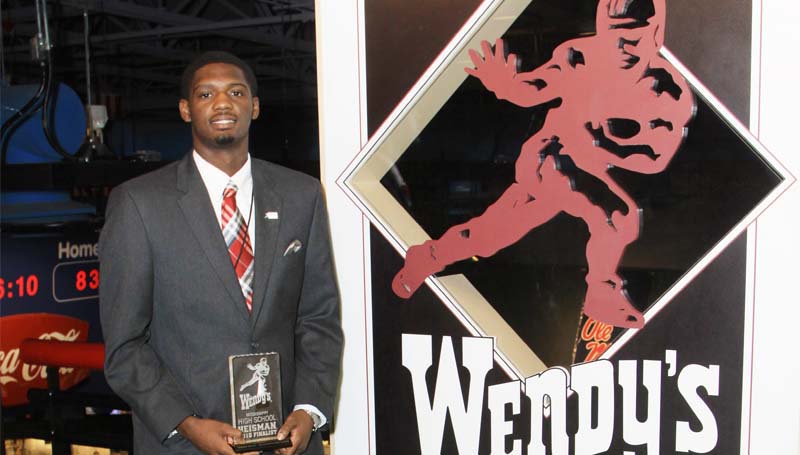 Brookhaven senior Darrian Wilson was selected as a top 10 finalist for the Wendy’s High School Heisman Award. A luncheon honoring the top 20 candidates took place at the Mississippi Sports Hall of Fame and Museum in Jackson Wednesday.

“It was a great honor to be selected as the top finalist for the Wendy’s Heisman Award,” said Wilson. “It was a great experience for me and I will always cherish it. I was honored to represent Brookhaven in the special ceremony with several talented individuals.”

Wilson juggles a busy athletic schedule with a demanding academic menu, too. He is a member of Brookhaven’s football, basketball and baseball teams.

Wilson is an honor student who has made the Superintendent Scholars or Honor Roll list each nine weeks. He is also a member of the National Honor Society, a student representative on the Brookhaven Healthy Hometown Committee and a member of the Alpha Phi Alpha (Mu Pi Lambda Chapter) Beaus and Mississippi Boys State.

Looking ahead, Wilson wants to pursue a career in kinesiology, but he is undecided on what college he wants to attend. He is still receiving several athletic scholarship offers to play basketball and baseball.

Wilson is the son of Preston Wilson and Betty Wilson. He was joined at the luncheon by Coach Tommy Clopton and Rod Henderson.

The Wendy’s High School Heisman Award is nationally known, and the award program was created in 1994 by Wendy’s and the Heisman Memorial Trust. High school athletes are asked to fill out a form stating their achievements both academically and athletically, their community involvement, plus submit an essay regarding an influential person in their lives. One male and one female from each school is eligible for the honor, which recognizes outstanding achievement in athletics, academics and the community. Each state is represented by one male and one female in the national competition.