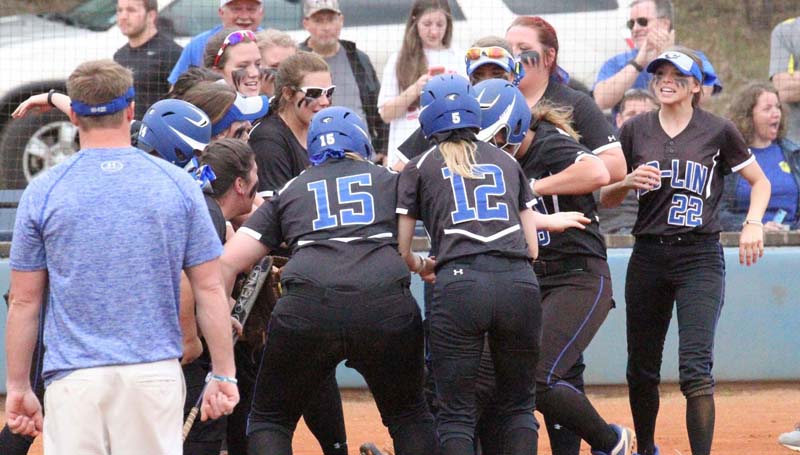 WESSON – The Co-Lin Lady Wolves offense was in full force Monday night as the team racked up 19 runs and 30 hits in the doubleheader against the Southwest Lady Bears.

The Lady Wolves will be back in action on Thursday as they host Meridian for a doubleheader beginning at 3 p.m..

The Lady Wolves took the opener 5-1 behind the pitching of sophomore Kaitlyn Taylor who pitched a complete game with nine strikeouts, and hit a three run home run to break the game open in the fourth inning. The game started out as a pitching battle between Co-Lin’s Taylor and Macy Fulton of Southwest as the game remained scoreless through three and a half innings.

The Lady Wolves plated the first run in the bottom of the fourth when Brittany Barbay singled to left field and scored Taylor. Southwest responded in the top half of the fifth with a solo home run from Fulton.

In the bottom of the fifth the Lady Wolves remained disciplined at the plate as Lauren Brashier and Jessica Crum both drew walks. Taylor followed with a three-run homer to the opposite side of the field that gave the Lady Wolves a 4-1 lead.

Kayla Britt scored Dianna Hobgood in the bottom half of the sixth with a sacrifice fly to add an insurance run.

“KT [Kaitlyn Taylor] had a great outing after allowing one hit,” said Lady Wolves head coach Allen Kent. “It was a great pitchers duel early and KT really stepped up for us today.”

Barbay went 3-for-3 from the plate for the Lady Wolves with a double and two singles for an RBI. Taylor added single to go along with her three-run homer. Brashier, Trevlyn Scott, Hobgood, and Mattie Avants added support with a single apiece.

Fulton earned the only hit for the Lady Bears in game one, the solo homer to left.

Taylor threw the 1-hitter to pick up the win. She struck out nine and walked one in a strong performance from the circle.

Fulton suffered the loss for the Lady Bears giving up 5 runs (all earned) on 9 hits, striking out 2 and walking 2 in 7 innings.

The Lady Wolves jumped out to an early 2-0 lead in the bottom half of the first inning after Southwest pitcher Rebecca Davis walked in 2 runs. Southwest tied the game in the next half inning with a 2-run single from Bremenkamp.

In the second inning, the Lady Wolves responded with a two-run double from Taylor that brought in Avants and Kamryn Vandlandingham putting the Lady Wolves up 4-2. Co-Lin added two more runs in the inning pushing their lead to 6-2 as Scott drove in Taylor with an RBI single to left.

In the sixth, the Lady Wolves added three more runs, which finalized the game with the eight run rule.

Brashier was 5-for-5 from the plate with an RBI to the Lady Wolves offensively. Taylor (2 RBIs) and Scott (4 RBIs) added a double and two singles apiece. Crum and Avants had three singles and an RBI apiece. Adding support were Vanlandingham and Byrd with two hits each.

McKenzie Brock and Bremenkamp led the Lady Bears at the plate with two hits each. A host of Lady Bears posted one hit in the contest.

Rebecca Davis took the loss for the Lady Bears after throwing 2.1 innings. She gave up six runs, (all earned), eight hits and three walks. Jeney Hudson threw three innings and gave up eight runs (all earned) on 13 hits, struck out two and walked one.