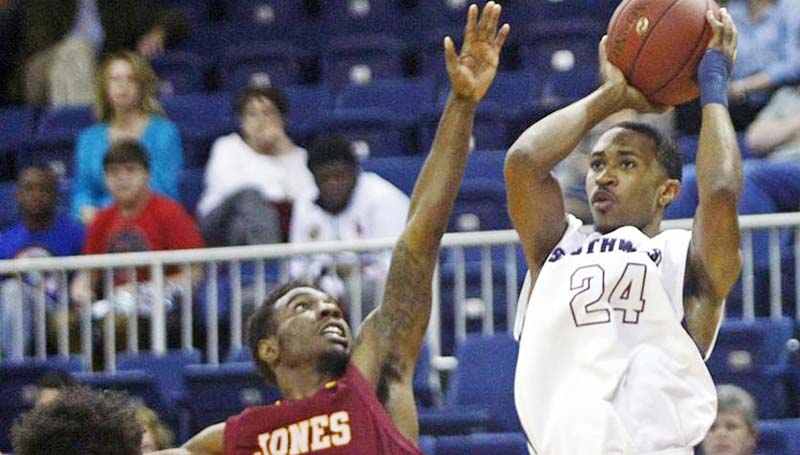 For his performance in the Bears’ run to the MACJC state championship last week, freshman Rodrick Sikes has been named the MACJC men’s basketball Player of the Week.

In the Bears tournament-opener against Northwest, Sikes (6′ 1″, 170-Ocean Springs-St. Martin HS) played 32 minutes. He was 9-13 from the field and 9-12 from the free throw line and finished the game with 27 points. He also added nine rebounds and two assists.

In the championship game, a 94-83 overtime win over Jones County, Sikes again played 32 minutes. He was 6-9 from the field and 17-22 from the free throw line for a total of 31 points. He also recorded six rebounds and four assist.

Bears’ head coach Thomas Gray said that Sikes’ “play this past week was exceptional. I couldn’t be happier for him to have had a successful week like he had.”

“He had a tough time coming back from (an early season) wrist injury,” Gray went on, “(and) I’m just so proud of what he stands for as a young man with the patience and ability to push through adversity while he was recovering. He definitely showed everyone the caliber of player that we all know him to be.”

Sikes is the third member of the Bears’ squad to receive the league’s POTW award during the 2015-16 season. Teammates Lafayette Rutledge and Terrell Miller also captured the honor. Sikes will now automatically be nominated for the NJCAA POTW award.