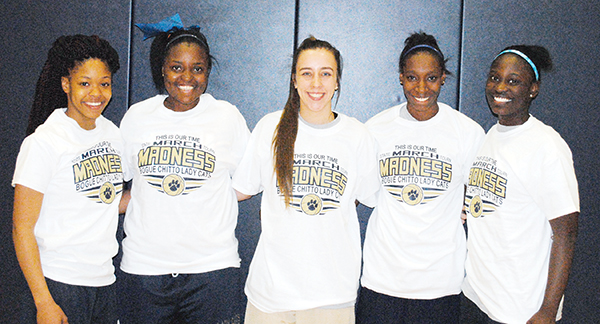 Bogue Chitto’s five seniors – Zariah Matthews, Christian Black, Karlie Williams, Pertashia Henderson and Shakirianna Jefferson – will lay it all on the line today as they look to end a long drought at the Big Dance in Jackson.

Their goal is to snap BC’s 21-year state championship drought when they battle the West Union Lady Eagles at Jackson State University starting at 10:30 a.m.

The Lady Cats are no strangers to big games.

The Lady Cats have suffered bitter disappointments in their trips to Jackson the last three out of four years – falling to Byers twice in 2012 and 2013 and last year losing to West Union in overtime.

This season, the seniors said they are more mature as players and as a team. They have worked hard in practices and in games to get to this point. They will do everything that it takes to win.

“As a team, we have matured and I have also matured as a ball player,” said Matthews. “Our attitudes have changed tremendously. Last season wasn’t good enough. We came up short, but this season we have definitely progressed as a team.”

“We have become more mature team wise and individually,” said Black. “We have worked hard in practices and in games by pushing each other to get better to get back to this point. Last year, I felt like that we were nervous going in, but this season our confidence is right where it needs to be.”

“The team has become a lot closer and we are more determined than ever,” said Williams. “We have always wanted to win it all, but this season we are more focused than ever. Last year, I believe that we were a little over confident going into the game, but this time around is different. We are treating every game the same no matter if our opponent is good or bad.”

“We have worked hard to become a better team,” said Henderson. “Everyone on the team is dedicated to each other. I am very confident in my teammates and myself that we will do whatever it takes to win and reach your goal. Falling to West Union last season was tough, but we have come together this season with the same mindset to grow closer as a team.”

“As a team, we have come a long way offensively and defensively,” said Jefferson. “My team and I have worked hard to get to this point. Everyone has stepped up this season to make each other better as a team. Last season was an okay season, I feel like we want it more this year after losing by two points in overtime at the Big House last year. I believe that we have definitely improved.”

If Bogue Chitto wins today, it will move on to face the winner of the Biggersville-West Lowndes matchup in the final four March 7.

Hornets will travel to Clarkdale for soccer playoffs