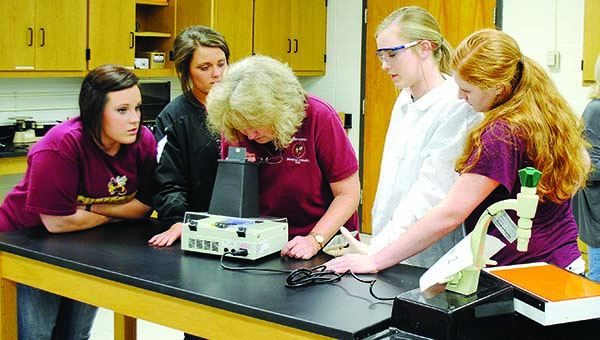 Photo by Aaron Paden / Students from Loyd Star, Enterprise and Natchez Cathedral gather at Co-Lin for an entomology DNA lesson.

Biomedical students from Natchez Cathedral, Loyd Star and Enterprise met Wednesday at Copiah-Lincoln Community College for a lesson in entomology, the study of insects.

“We took the specimen out using a toothpick and put it on a paper towel to let it air dry,” she said of the insects. “Then basically you smush ‘em up. Then you add InstaGene, basically to keep it from destroying the DNA.”

“The reason she knows a lot about it is because she and one other student just finished competing in a science fair at USM on their research on wolbachia in fire ants,” Dahlin’s teacher Kathy McKone said. “I think they’re the only ones in Lincoln County that went.”

Dahlin’s team got second place, and she said she’s moving up to the University of Mississippi in April for the state-wide competition.

Students also listened to a guest speaker, State Medical Entomologist Dr. Jeffery Brown. Brown talked about his time in the U.S. Air Force, where he received a commendation for his work on Disease Vector Ecology Profiles.

“I never thought I’d be doing things like that,” Brown said. “You never know what’s in store for you.”

McKone said entomology is an important area of research.

“A lot of it would be with disease control,” McKone said. “Trying to control insects that carry diseases that humans get, like West Nile. Then the other would probably be with all the crops that insects destroy.”

Along with being pests for agriculture, McKone said some insects are an important avenue for pollination. Honey bees, for example, are responsible for pollinating many crops in the United States and now face difficulty due to Colony Collapse Disorder.