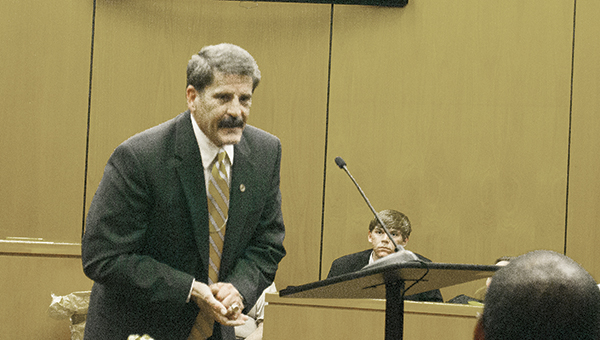 File photo / A lawyer addresses the jury in Lincoln County’s Circuit Court during a 2015 trial. Through plea bargaining, very few cases actually make it to this stage.

Through the evolution of the judicial branch, plea bargaining has become a necessary part of the overwhelmed criminal justice system.

Facing economic strain and a disproportionate amount of cases per year, it is a common practice to reduce many charges in pre-trial intervention. Despite obvious objections recognized by those who work within the system as well as the general public, plea bargaining often results in justice that suits all involved parties.

Pre-trial intervention is a negotiation between the state prosecution and the defendant during which many factors are weighed by each side. Across the country and in all level of courts from state circuit courts to federal court, an average of approximately 90 percent of cases result in the defendant pleading guilty to a charge lesser than the original. There are several key factors that support why plea bargaining is necessary to keep courts running. For the purposes of this article, crimes and cases that are being evaluated are violent felonies.

Not enough days in the year

Negotiating charges for a guilty plea is encouraged within the judicial system first and foremost for the simple fact that there aren’t enough days in the year for every case to be tried in front of a jury.

“If every case indicted went to trial there wouldn’t be enough days in the year to try them all,” Lincoln County Circuit Court Judge David Strong said.

There are only so many days for which jurors are available. In Lincoln County, there might be 40 trial days in any given year.

“It’s an absolute necessity. For instance, there was something like 700 indictments in Pike County last year,” Strong said.

“I think essentially plea bargaining is just a necessary part of the criminal justice system, due to the number of people that get indicted and the number of trial dates in the year,” Strong said. “It’s gone on forever and I suppose it will continue on; there are some cases that are negotiated and pleaded out and some that just have to be tried.”

District 14 District Attorney Dee Bates said the pre-trial negotiation process has as much to do with economics as it does the level of evidence the state may have.

“For instance, this last term of court that we had in Marion County, one of my five counties, there were 77 cases set for trial in four weeks,” District 15 District Attorney Hal Kittrell said. “You can not try 77 cases in four weeks. You just can not. So we go forward and we look at it, and most of those cases plea.”

Securing a sentence vs. taking a chance

And when you know an individual is guilty but the evidence may not be strong enough to prove it, Bates said, it is better to get a reduced guilty plea than to risk the person coming out of trial with no sentence at all.

“We may be able, my victims and I, to live with a murder two conviction even though we feel like it’s first-degree murder, but the worst thing that could happen is manslaughter,” Bates said. “We look at: there’s a chance of a murder one conviction, a chance of murder two and a chance of manslaughter. So we’ll offer that. The defense attorneys know that also, we don’t want that manslaughter. We avoid the lesser and the not-guilties.”

When deciding the plea offer, which is later a recommendation for the judge, all parties have factors to weigh. The defendant will weigh his/her chances of possible outcomes, typically having an idea of the evidence against him/her. The prosecution will evaluate how strong the evidence is, knowing that a lesser sentence is better than none. Bates said the prosecution also considers the affect of a trial on the victim or his/her family, considering that an admission of guilt often helps bring closure.

“The victims a lot of times know the defendant and we take into consideration their wishes,” Bates said. “In sexual battery cases, our victims a lot of times do not want to come in and testify. Young boys or girls, 12 and 13 years old, and you wonder are you doing more harm to the child? They’re reliving the entire thing and a lot of them don’t want to participate.

“I know this individual is guilty and I just don’t know if I can prove it,” Bates said. “So, negotiation. The defense realizes they’re guilty; they realize there’s a risk.”

“We consult with our victims and our law enforcement and say, ‘Listen, on this case we would be willing to plea this, and this is what time we would want to be served,’” Kittrell said. “This is the restitution for our victim that they’re requesting. Then we put that offer out there. If they accept that offer, then we go ahead and plea it and get them sentenced. If they don’t accept it, then they go to trial.”

“Say with sex crimes against children, you have to balance the strength of the case and what kind of witness the child is going to make, a lot of times those crimes are pleaded out,” Strong said.

How often cases are pleaded down

According to federal government research and records, the overwhelming majority (90 to 95 percent) of cases result in plea bargaining.

In Lincoln County, 11 of 18 violent felony cases were pleaded down for a lesser charge in the last year (Feb. 2015-Feb. 2016). That equates to 61.1 percent pleaded down. This lower percentage could be for a number of reasons, including the defendants’ choices to go to trial.

“We just finished Marion County,” Kittrell said. “I think we plead close to 30 cases and we had a case up for trial one day. I would venture to say that probably 90 percent of the cases will probably plea. The fact is, we know what the judges will usually give on sentences. The defense attorneys know what they will usually give. We know what we usually recommend. It’s just one of those systems where everybody in the system pretty well knows what the judges are going to do and what they’re not going to do. So it really works itself out.”

“Everyone has a right to a trial and some choose to go to a trial, but if there’s overwhelming evidence and they want to take the chance, and then are found guilty, those individuals will a lot of the time get the full sentence and more time. In that case, you don’t get credit for the admission of your guilt,” Bates said. “Everyone who admits their faults should get some sort of credit, and it does help for the closure for the relatives.”

For those seeking justice, the offender admitting that they are guilty offers more closure than defendants who deny any wrongdoing, or rather are seeing if they can get away with it. It can feel like adding insult to injury.

Bates said someone who comes in and pleads guilty deserves some credit for their admission. In the court system, he said, it is encouraged, and offenders have a right to come in and admit their faults.

“One thing I’ve learned through the years, individuals that admit to their crimes are more likely to be rehabilitated,” Bates said, perhaps in contrast to the cold convicts who are flawed on a deeper, moral level. “Even though we have a terrible, terrible rate of recidivism, those people are probably more likely to be rehabilitated, versus others that have a moral flaw.”

From the outside, offering an accused killer less time in prison is off-putting at least, and seemingly unjust at most. However, Bates said, one of the reasons behind suspending time for an offender’s sentence is actually so that he or she may be supervised for a longer period of time.

“We suspend time and the reason is to make sure that the Mississippi Department of Corrections monitors them through post-release supervision or probation,” Bates said. “That way you’re monitoring them they don’t commit other crimes, if they test positive for illegal substances they can be revoked, their residence has to be approved by MDOC and they are ordered to pay their restitution so you’re actually extending the period of supervision.”

When someone “flat-times” their sentence, Bates said, it means they serve the years they are sentenced with none suspended.

“When they flat-time their sentence, when it ends, the sentence is completely expired,” Bates said.

For violent crimes, offenders must serve at least 50 percent of the years in prison. After that, they may have a number of options like parole that could get them out. With time suspended, they may spend less time in prison but they will have close monitoring on the outside for longer.

Also, it ensures a better chance of actually collecting restitution, which Bates said is a flawed aspect of the justice system in Mississippi.

“Plea bargains keep costs down, gets individuals to admit their guilt and understand what they did is wrong, and then give credit for the fact that they made that admission and hopefully bring closure to victims and their families,” Bates said. “And to find out those who cannot admit they’re wrong, and will not, and then we see what evidence we have and can we prove it. We try to determine who is very dangerous that we have to remove from society and determine those who, while we’re not overly fond of their criminal activity, but we can’t afford to continue to house them.”