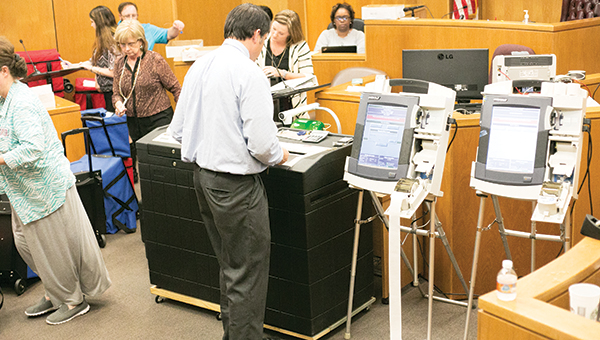 Of about 21,000 registered active voters, 8,384 cast ballots in the Mississippi presidential primaries in Lincoln County Tuesday. The result was a 47 percent win by Donald Trump for the Republican nomination and an 85 percent win for the Democratic nomination by Hillary Clinton.

About 6,000 of those votes were cast in the Republican primary.

With all precincts reporting in Lincoln County:

Cruz topped Trump in the Caseyville, Pearlhaven, Vaughan and Alexander precincts. Rubio and Kasich both saw the most votes in the Halbert Heights precinct — 115 for Kasich and 58 for Rubio.  Rubio won the Brignal precinct with eight votes to Trump’s three and Cruz’s two.

Trump’s highest precinct total was at Enterprise, where he got 244 votes. Cruz got 178 there.

All candidates on the Republican ballot got at least one vote in Lincoln County.

Trump gained a huge margin among Republicans who wanted a candidate who “tells it like it is,” while Cruz ran strong among people who identify as very conservative and those wanting a candidate who shares their values, according to early results of exit polls conducted by Edison Research for The Associated Press and television networks.

Mississippi was awarding 40 Republican and 36 Democratic delegates in the presidential race.