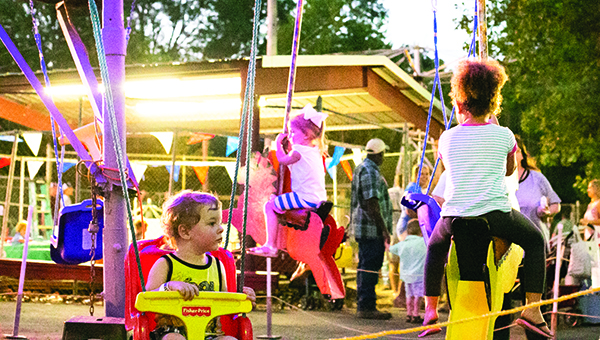 Photo by Kaitlin Mullins / The Exchange Club Park will open this weekend. The organization has given school groups the opportunity to raise funds by running the food booths.

The event will be at Exchange Club Park on Friday and Saturday from 6 to 9 p.m. Similar to the fair, Spring Fling will have all of the amusement park rides open, including the tilt-a-whirl, swings, Ferris wheel, merry-go-round and kids cars.

Armbands will be available for purchase at the event — $5 for children and $10 for adults for unlimited rides.

Exchange Club President Roger Leggett said the club created Spring Fling to raise money for their causes and to create a place for parents and children to come during spring holidays.

“Some kids go to the beach but some don’t really have a place to go,” Leggett said. “It’s a place that kids enjoy coming to and it’s for a gamut of people.”

A variety of food options will also be available, provided by various school organizations in Lincoln County.

“Rather than go into the food preparation like we do at the fair, we gave the opportunity for some of the schools to do the food,” Leggett said. “If they want to volunteer to do that then they take the proceeds from that for their organization.”

Leggett said proceeds from the Spring Fling would go to the up-keep of the park and several programs the Exchange Club participates in throughout the year.

“Our main mission is child abuse, which is the mission of the international Exchange Club,” Leggett. “That’s our major goal. We also contribute locally to things like Relay for Life, Catch-A-dream, Make-A-wish and other needy organizations.”

The Exchange Club is looking for nominations for its Golden Deeds award.

“The Golden Deeds award is given by the Exchange Club to an individual that does outstanding things, not looking for any recognition,” Leggett said.

Nominees do not have to be Exchange Club members. The nomination process consists of a fellow citizen writing a letter to the Exchange Club discussing the accomplishment of that individual and why they should be nominated.

“We have a book of Golden Deed winners that goes back many, many years, and it’s just a way of honoring people,” Leggett said. “The ones that we honor are those that don’t care about being honored. They do it because their heart is led to do it. We feel good about being able to honor those people at our annual banquet.”

Leggett said the club has appointed an internal committee to review the nominations and pick the Golden Deed winners.

Interested in nominating someone? Send a nomination letter to the Brookhaven Exchange Club at P.O. Box 486, Brookhaven, MS 39602. The deadline to nominate an individual is April 15.