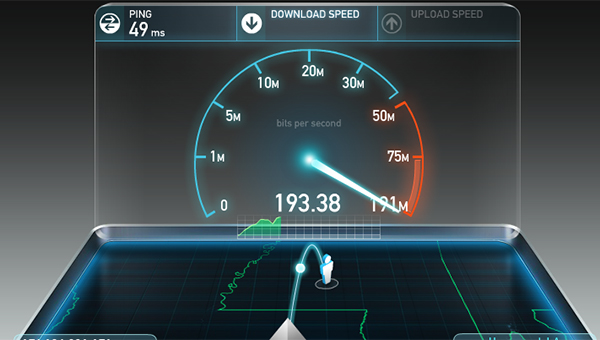 Graphic courtesy of Ookla / With recent upgrades, Cable One customers have the option of reaching up to 200 megabytes per second download speed.

Businesses take site selection seriously. There are a number of criteria that a business will look at, including high-speed Internet services that will be attractive to potential employees.

If you think the ability to stream Internet content onto multiple devices at the same time doesn’t matter to today’s professionals, think again. With more people cutting the cord and moving to Netflix, Hulu and other similar services, the speed of the Internet connection matters greatly.

Brookhaven’s dreams of super-fast fiber Internet service — and the many benefits it would provide  — took a hit when negotiations between C Spire and the city fell apart last year. But the city’s residents will soon have a way to reach fiber Internet speeds.  Businesses in the area can already access C Spire’s high-speed Internet service.

In October, Cable ONE doubled its download speeds for new and existing residential high-speed Internet customers in more than 90 percent of its markets as the first phase of its GigaONE service. Although Brookhaven missed out in October, local subscribers have been taking advantage of faster speeds since the first of this year.

The second phase will fully implement the GigaONE gigabit plan by the end of 2016, Cable ONE Public Relations Director Patricia Niemann said.

While Brookhaven officials were turned off by C Spire’s demands when negotiating an agreement for the company to brings its fiber service, they were happy to work with Cable ONE.

“We were really pleased about that when it came up,” said city attorney Joe Fernald. “It was a win-win, and we didn’t have to do any construction or get into a (restrictive) contract.”

While city officials were interested in pursuing fiber Internet in the city, like some other similarly situated municipalities the proposed agreement C Spire requested was not acceptable to the city. Cable ONE will be able to increase its Internet service speeds without ripping up sidewalks or streets and without forcing the city into a restrictive agreement.

Cable ONE has invested more than a half-billion dollars over the past five years on network upgrades and enhancements — the first step in providing gigabit service to residential customers.

“GigaONE will support the technology needs of the communities we serve, now and in the future,” said Joe Felbab, vice president of marketing for CableONE. “We are excited to be able to offer gigabit service to nearly 1.5 million homes in the markets we serve.”

“The city has been very supportive of GigaONE and looks forward to our launch later this year,” Niemann said.

The new service is being provided over existing hybrid fiber-coax networks in residential areas.

“The benefit of this type of delivery is increased reliability, and in combination with our 32-channel bonding, it allows us to offer gig service to all of our customers in the entire city, as opposed to offering it to only specific areas of the city as many companies have been doing,” John Hilbert, general manager of Cable ONE in Brookhaven, said.

That was one criticism of C Spire’s fiber service — it would only be available in neighborhoods where enough customers signed up.

With the new speed, Cable One customers are able to download a high-definition movie in 60 seconds or less, download 100 songs in four seconds and download a game in 29 seconds.

“Our extensive fiber network deployment and continued investment in improving and expanding our network enables us to offer the fastest, most reliable internet connections at the best value, while contributing to the economic development of the communities we serve,” Felbab said.

One major difference in GigaONE and many other gigabit services is that once a city becomes active, all customers within the service area will have access to the new technology.

“Cable ONE is the first provider in the majority of our markets to offer gigabit speeds to residential customers,” Felbab said. “We’ve been committed for decades to serving smaller cities and towns, and we are delighted to provide them with the latest technology to make them gig cities in 2016.”

The first phase has benefited all customers without an increase in rates, but the second phase of the service will be reserved for those customers willing to pay for the package. The GigaONE package that will be available to customers by the end of the year will cost $175 per month.

Bill Jacobs, a long-time Lincoln County resident who has been interested in having fiber come to Brookhaven, said it could promote economic growth because it would increase the quality of life here. GigaONE service is similar to fiber speeds and will potentially do the same thing.

“Industries have a checklist they follow dependent on the industry needs,” he said. “The more positive checkmarks the higher the community ranks.”

Since fiber service will be in limited communities, Jacobs, the former owner of The Daily Leader, said there is a belief that people will search out communities that have such. That would impact housing values and ad valorem taxes for the city. Jacobs also predicted that more tax dollars due to more taxpayers in the city should lower tax rates.

Chattanooga, Tennessee, is often called “Gig City” because it had the first and fastest — and now one of the least expensive — high-speed Internet services in the county, according to a New York Times story.

“It created a catalytic moment here,” Sheldon Grizzle, the founder of a company that helps start-ups, told the Times.  The Internet service “allowed us to attract capital and talent into this community that never would have been here otherwise.”

“This is a small city that I had never heard of,” Toni Gemayel, a Florida native who moved his business to Chattanooga because of the Internet speed, told the newspaper. “It beat Seattle, New York, San Francisco in building the Gig. People here are thinking big.”

In an article in Site Selection magazine, a trade publication for economic developers, Matt McQuade likened fast Internet to infrastructure such as gas and water for businesses choosing a new location.

“Broadband service connects businesses and individuals to the global marketplace,” he said. “It has flattened the world by allowing businesses to communicate and collaborate in ways never before possible due to the increase in the amount of information that can be transferred at faster speeds and new software technology made possible by its bandwidth.”

If broadband Internet is a sought-after piece of the site selection puzzle, fiber or other gigabit Internet services certainly will be as well.