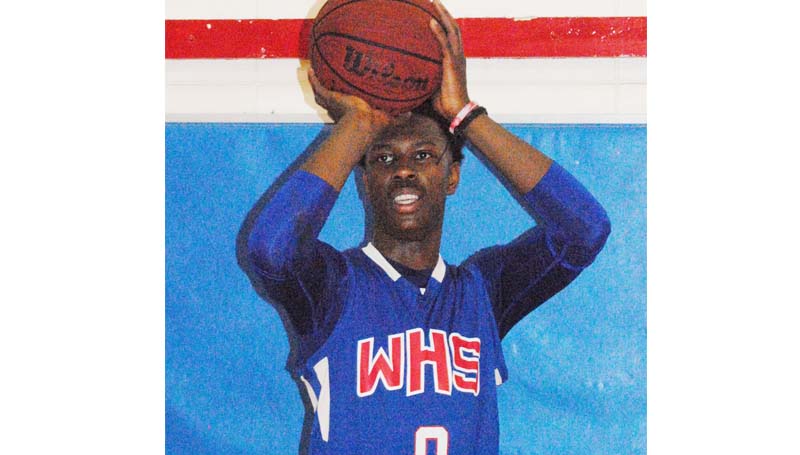 Wesson senior forward Anthony Jones led the state in scoring with 29.8 points per game. He is definitely a force on offense, but also had the defensive skills to back it up. He finished the season with 10.8 rebounds, 2.3 steals, 2.3 assists and 1.7 blocks per game. He helped guide the Cobras to a third place finish in the Region 7-3A tournament.

Because of his impressive numbers, Jones has been selected as The Daily Leader’s Boys All-Area Most Valuable Player and Mr. Basketball for the 2015-16 campaign.

He is a 6-foot-5, 180-pound force that has the ability to play opposing teams inside or outside.

“It is an honor to be selected,” Jones said. “I know there were a lot of players in the area to choose from.”

Anthony Jones,  17, is the son of Felicia Butler and Anthony Jones Sr. His jersey number on the Wesson basketball team is No. 0. Why? Because of his favorite NBA player Russell Westbrook. “I really like the way he plays,” said Jones. “He plays hard in every game.”

Jones shared his thoughts on his senior season at Wesson. “We had an up and down season, but overall it was good. I feel like we came up a little short at the end and we should have done a lot better, but in the end that is the way things happen sometimes.

“Overall, I am proud of my team and I would like to thank my teammates for helping me have a good season. I especially like to thank God for blessing me with the opportunities and the ability to play.”

After graduation, Jones said he wants to sign with a Division 1 college team, but if the offer does not come then he will attend Co-Lin. He is currently undecided on what career he wants to pursue.

“Jones was our go-to guy this season,” Wesson coach Rusty Newman said. “He helped us be successful as a team. Jones works extremely hard on and off the court to be successful and he was also a great leader for our team. I feel like he has a bright future ahead of him. I am looking forward to watching him compete at the next level.”

Damarius Brooks,  a junior point guard for Brookhaven, was the second leading scorer for Panthers as he averaged 13.2 points, 3.6 rebounds, 4.2 assists and 1.8 steals.

Darrian Wilson,  a senior forward for the Panthers, averaged 10 points and had 4.3 rebounds per game.

KeyShawn Feazell, <cTypeface:Plain> a junior forward/center at Lawrence County, was instrumental in the Cougars’ march to the state playoffs. Feazell averaged 17.3 points, 8.6 rebounds, 1.2 assists and 1.1 steals per game.

Gabe Lewis,  a senior guard for the Cougars, was the second leading scorer for Lawrence County. He finished with 11.1 points, 2.7 rebounds, 2.6 assists and two steals per game.

Eric Rhymes,  a junior forward at Wesson, averaged 17.6 points, 7.2 rebounds, two assists and 2.5 steals to help the Cobras advance to the state playoffs.

Levi Redd,  a senior forward for the Hornets, finished with 19.5 points, nine rebounds, two assists and three steals per game.

Keshaun London,  a senior guard for West Lincoln, was the top scoring leader for the Bears with 19.8 points, 6.4 rebounds, 2.3 assist and two steals per game.

Dwayne Pendleton,  a junior guard at Enterprise, had an outstanding season, averaging 25 points, 7.5 rebounds, 1.3 assists and 2.6 steals per game.

Jontavious Smith,  a freshman forward for the Jackets, averaged 16 points and 8.6 rebounds per game.

D.J. Nunnery,  a senior guard for Bogue Chitto, helped guide the Bobcats in a rebuilding season. He was the top scorer with 18 points, six rebounds, three assists and two steals.

Malik Richardson,  a freshmen center for BC, had a very productive year for the Bobcats as he finished 17 points, eight rebounds and averaged two blocks per game.