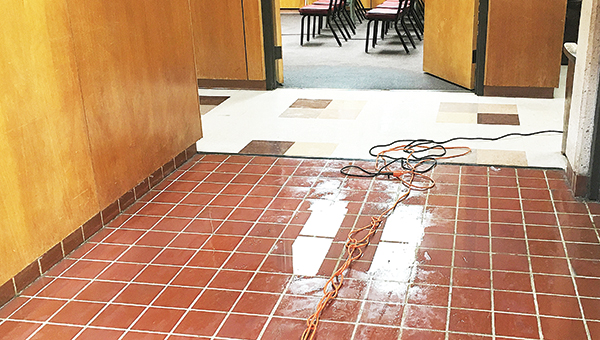 The Brookhaven Board of Aldermen meeting had a wet start and a change of scenery Tuesday after a broken pipe flooded a significant portion of the Lincoln County Government Complex building.

The meeting was moved to the boardroom on the other side of the building.

The board discussed a proposal by Mitchell Technical Services for the operation and maintenance of the water plant, wells and elevated tanks. The proposal is for a period of five years at $115,000 per year.

Outgoing Public Works Director Steve Moreton addressed the board with support for the proposal from the water and other involved departments. The city has worked with this company before. It helped untangle the mess at the water treatment plant about five years ago.

“We trust them, we know they do a good job and definitely think this is the right way to go,” Moreton said.

Moreton said with the growth of the city, and the country’s mounting fear of lead, the extra manpower and expertise the company offers would be beneficial.

The board agreed, adding that it was relatively cost neutral, and would save money in the long run.

The request is for a ribbon cutting ceremony starting at 10 a.m. on April 14. Police Chief Bobby Bell suggested closing more of the road around where the ribbon cutting will be. The road will be closed from 7 a.m. to 12:30 p.m.

• Received the February revenue and expenditure report submitted by the clerk and the February privilege license report showing revenue of $4,225.59.

• Received the February Fire Department run report showing 19 runs in the city limits and one run outside the city.

• Approved Grant Britt and Kelly Porter to attend the rope rescue class at the State Fire Academy this week. The cost of the class is $68 each and meal reimbursement is $60 each with transportation being provided.

• Approved Seth Morris to attend the vehicle extrication class at the State Fire Academy March 21-25. The cost of the class is $400 and meal reimbursement is $60 with transportation provided.

The board went into executive session for the purposes of discussing personnel and possible municipal litigation.