Three years ago to the week, Dwayne Brumfield started his career at Brookhaven Fire Department. In that time, he has absorbed wisdom and experience that has helped him become a competent firefighter with no less passion for the job than the day he started.

Brumfield, 36, is a Brookhaven native who lives “in the country” with his wife. In 2011, he got his first opportunity to work as a firefighter with McComb Fire Department. He has learned a lot in that time, Brumfield said, by listening to more seasoned firemen describe their experiences as well as gaining many of his own. Brumfield said absorbing what the veteran firefighters say and actual practice in the field are the two key factors that help turn rookies to pros. 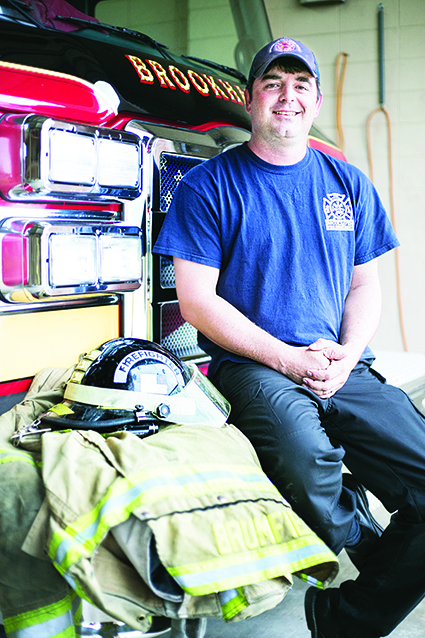 Photo by Kaitlin Mullins / Dwayne Brumfield names the fraternity between fellow fighterfighters as one of the essential qualities of having a well-oiled team.

“I know when I first started, just sitting back and listening to what they had to say helped me learn things to do,” Brumfield said of seasoned firemen. “You get seven weeks at the academy of training, you get a lot of training, but it’s still not what you might call ‘the real deal.’ Listening to people that have been in that situation, it’s like they say about listening to the old wise men.

“They may have been there a long time, and they may not get off the truck and run wide open no more, but there was a time when they were your age, and they did jump off the truck and run wide open,” Brumfield said. “So when they have information to share it’s best to kind of be sitting back and seeing what they have to say — you may learn something.”

That hierarchy of respect is just a part of what makes a firefighting crew a typically close-knit group. Spending 24-hour shifts together three days out of the week certainly helps bond a team. Brumfield said his shift at Station 2, and the guys he works with day in, day out, have gotten “into a groove,” so to speak. He said when they have long periods between calls, they’ll often do some self-led, in-house training.

Along with the core mission of helping people, firemen often cite the thrill and adrenaline rush as being a part of why they love the job. Brumfield cites the variety of day-to-day as one thing he particularly loves about being a firefighter.

The truck at BFD Station 2 is the one equipped with the Jaws of Life and proper equipment for vehicle extraction, so all of those calls are directed to that station. While Brumfield’s shift may make more runs for that reason, there is a certain level of anxiety that comes with answering calls so close to home.

“You get a call that says ‘We’re going to need jaws out here,’ — it would be crazy for me to lie to you and say I don’t think about where we’re headed and what time it is,” Brumfield said.  “You can’t help but think ‘I hope my wife’s made it home,’ — it can always be someone you know.”

And of course it doesn’t have to be a friend or loved one in danger to elicit an emotional response. Brumfield says the most challenging aspect of his career is the mind not being able to forget what the eyes have seen. As all first responders, firemen see the rough stuff that many people couldn’t handle on a regular basis. After a tough call is perhaps when the brotherhood of a fire department is most important. When they wish to leave the workday at the station, or not trouble their families at home with gruesome or upsetting stories, the heroes have each other.

“We’re pretty good about, guys I work with, when we come back we don’t stay bottled up,” Brumfield said. “We’ll discuss amongst us and kind of let stuff out. We don’t have something go on and just sit there and not vent about it, we’re pretty open.”

Being a firefighter means that the people you jump off the truck with will be the ones saving your life when something goes wrong. And when everything goes right, after the rush and the intense, grueling work is over, Brumfield, like his colleagues, can sleep well knowing he made a difference.