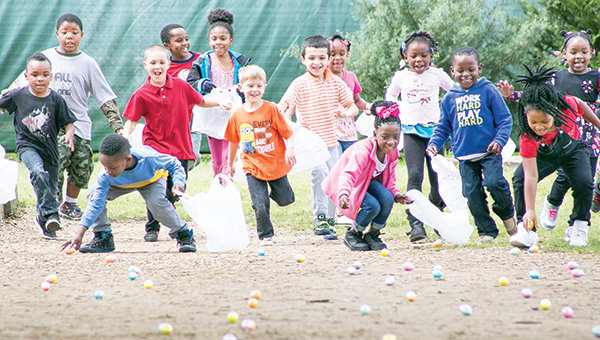 Photos by Kaitlin Mullins / Kindergartners at Mamie Martin Elementary descended in droves upon the egg-littered playground Wednesday afternoon. children explode off of the fence at the signal — a wave of Principal Rob McCreary’s hat. The 5-year-olds collected all of the eggs in less than 30 seconds.

Reluctant parents of rising kindergartners might get a little peace of mind after visiting their child’s new daytime destination. Making the transition can be hard on parents, so Mamie Martin Elementary is hosting tours starting next week.

Mamie Martin principal Rob McCreary said the tours will show parents the facility and grounds, while providing information packets with everything they need to register. McCreary said parents and tour guides will go over what a typical day is like as well as share tips with parents on how to ready their child.

“We understand that full-day kindergarten — that’s a big step for parents. For some, it’s a big transition getting out of the house and coming to a full day of school,” McCreary said. “We want parents to be more at ease, to see what’s coming when they get here. We know that the most precious thing they have is their children, so we want to make it as easy a transition as possible for each parent.” 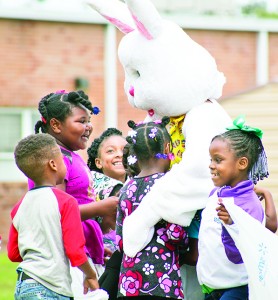 Above, the allure of the Easter Bunny distracted many kids from the mission.

McCreary said many things that previous generations were learning in first grade are now being taught in kindergarten. Preferably, students should be able to write his or her name, know their alphabet and their numbers (especially one through 10).

“Building on basic letter knowledge, we like to have them get a basis for reading before they get out of kindergarten,” McCreary said.

On April 1 there will be open tours for anyone not visiting with a preschool earlier in the week. Tours will start at 8:30 a.m. and every half hour until 11:30 a.m. Registration begins on April 4 and will last the entire month of April.

“We’ve got a lot to offer for kindergarten through second grade, and we like to show it to folks,” McCreary said.